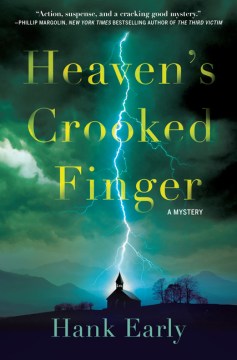 Very little would make Earl Marcus return home to rural Georgia after three decades. Not his father's recent funeral or making peace with his brother, Lester. But when Granny Lacey, the black midwife who took him in as a teenager, is terminally ill, Earl leaves his detective business in Charlotte for what he envisions as a short trip. He's also received a letter suggesting that his father, the snake-handling founder of the Church of the Holy Flame, isn't really dead but has "ascended." When he was 17, Earl's father handed him a copperhead; the snake bit him, leaving him unconscious and unaided for five days, with a scar and "the sight." A subsequent tragedy involving Maggie Shaw, the girl Lester loved but who chose Earl instead, left him disgraced and hating his father. That tragedy, it turns out, still simmers, and some have lethal plans for Earl upon his return. His only allies are a dog, a blind man, and Deputy Sheriff Mary Hawkins, Granny Lacey's granddaughter, who stands up to the corruption around her. Early's debut is a skillfully crafted southern gothic page-turner. Ophidiophobes, beware. Copyright 2017 Booklist Reviews.

Earl Marcus, long troubled by painful memories of his childhood in the Georgia mountains and terrors invoked by his father's fundamentalist church, thought he had escaped his fearsome past until a photo of his dead father, RJ, looking quite alive, is sent to him. Faithful followers of the Church of the Holy Flame insist that RJ has risen to live in a powerful and secret holy place in the mountains. Rumors of missing girls reappearing with strange marks on their skin and tales of an eerie place of power draw the reluctant Earl into danger as he tries to uncover the past and free himself from his hellish childhood. This gritty and riveting debut combines elements of a classic Southern gothic tale, enhanced by distinct pacing, a redolent sense of place, and striking characters. The mystery is suspenseful and action packed. Fans of James Lee Burke and John Hart will want to take note.—ACT

Earl Marcus, the narrator of Early's highly atmospheric debut and series launch, grew up in the North Georgia mountains, where his father, Ronald Jackson Marcus, the preacher at the Church of the Holy Flame, encouraged snake handling. As a teen, Earl nearly died after he was bitten by a cottonmouth and his father "refused to take me to a hospital and had instead left it to God to decide my fate." Earl left home and now, years later, works as a PI in Charlotte, N.C. A month after a body identified as Roland's is found in the woods, Earl gets a letter from Bryant McCauley, one of his father's most fervent supporters, with a photo suggesting that Ronald is still alive. Earl reluctantly returns to his birthplace, where, over much opposition, he seeks McCauley, who's disappeared, and his elusive father. Earl also gets on the trail of some missing teenage girls. Readers with a taste for raw, intense mysteries will be rewarded. Agent: Alec Shane, Writers House. (Nov.)

The weight of bloodMcHugh, Laura