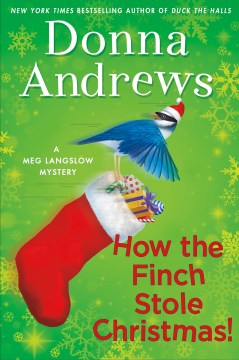 It's almost Christmas in Caerphilly, Virginia, and Meg Langslow's husband, Michael, is directing a charity benefit production of A Christmas Carol, starring Malcolm Haver, a has-been actor who is under contract to play Scrooge. Haver, a disagreeable drunk, keeps everyone in Caerphilly on a mission to keep liquor away from him, but when Haver's secret liquor supplier, John Willimer, is found murdered, Haver is one of the suspects, leaving everyone wondering if the show will go on. Complicating matters, Meg must deal with a group of exotic animals, a plethora of puppies, and dozens of cats, all of whom need homes. Then there are also Haver's persistent super fan, a dangerous animal smuggling operation, and Meg's need to determine how Weaseltide is celebrated. The always-busy, efficient Meg solves the murders while keeping order among family and friends; all the usual, wonderfully drawn, quirky characters are present in this satisfying, humorous entry in the long-running series. Copyright 2017 Booklist Reviews.

Here's another Christmas mystery from the laugh-inducing, multi-award-winning, .New York Times. best-selling Andrews (Six Geese a-Slaying). Meg's husband is turning his one-man show of Dickens's A Christmas Carol into a big, splashy production, with a famed if fading actor brought in to play Scrooge. Alas, the man has enemies.

Visiting Caerphilly, VA, especially at Christmastime, doesn't get old in this 22nd series entry (after Gone Gull). Meg's husband is directing a full-scale production of A Christmas Carol and has his hands full with a famous aging actor playing Scrooge. Meg and most of the town have been enlisted to keep the actor sober enough to get through the play, but one night, when tailing him, Meg stumbles upon a barn full of exotic animals and designer dogs. Then a raid on the property leads to an even more disturbing discovery—a human corpse. With her trademark wit and resourcefulness, Meg continues to thwart crime in an entertaining fashion. [See Prepub Alert, 4/17/17.]

Agatha-winner Andrews's pleasing 22nd Meg Langslow mystery (after ) finds Meg serving as the assistant director of her husband Michael's staging of Dickens's for the Caerphilly, Va., winter festival. Michael has brought in Malcolm Haver, an aging, once-popular actor, to play Scrooge, but Malcolm's drinking threatens the production. When Malcolm sneaks off, Meg follows him in her car to an isolated farmhouse, where she spots him buying liquor from a bootlegger. She also discovers a nearby barn filled with animals, including golden retriever puppies, dozens of cats, and a chimp. Later, the bootlegger turns up dead with two bullet holes in his forehead—and Malcolm disappears. Rescuing the animals—which becomes a community effort—and ensuring that the show goes on matter more than finding Malcolm or solving the bootlegger's murder. Andrews manages her large cast with dexterity and drops clues to the culprits' identity, but the ending will catch most readers by surprise.