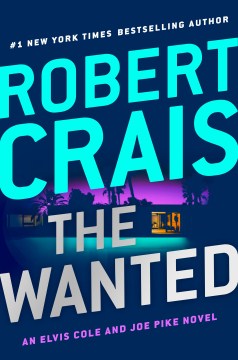 *Starred Review* Devon Connor's 17-year-old son, Tyson, suddenly seems flush with cash and sporting what appears to be a Rolex. Devon is worried that Tyson may be dealing drugs and hires PI Elvis Cole to find out. Meanwhile, Harvey and Stemms, deadly criminals for hire, are looking for a laptop with incriminating evidence about a murder committed by an extraordinarily wealthy Southern California family. In short order, Cole learns that the Rolex is part of the haul Tyson and two friends made in a series of robberies. The laptop was one of many the teenage criminals stole. With Tyson on the run, Harvey and Stemms inch ever closer—leaving carnage in their wake—to finding the teen and his partners. Lurking in the shadows and covering Elvis' back is his buddy Joe Pike, who, on a scale of dangerous guys, makes Harvey and Stemms look like the Bobbsey twins. Crais, who has a Grandmaster Award from the Mystery Writers of America, always delivers riveting crime fiction while somehow offering something unique in every novel. Here it's the surprisingly interesting, Tarantino-like conversations between Harvey and Stemms as they plan their next deadly steps. More fantastic reading from a perennial A-lister who belongs on every crime fan's TBR list. Copyright 2017 Booklist Reviews.

When single mom Devon asks investigator Elvis Cole and partner Joe Pike to look into her son's sudden wealth, they find that it stems from a series of high-end burglaries that turn deadly. From the No. 1 best-selling Edgar Grand Master.

A No. 1 New York Times best-selling author and Edgar Grand Master, Crais brings back investigator Elvis Cole and his partner Joe Pike but mixes in Jon Stone, who's made popular cameo appearances in previous books. Here, when single mother Devon asks Cole to investigate her son's new-found wealth, he discovers that it stems from a series of high-end burglaries that turn deadly. Originally scheduled for June 2017.

In bestseller Crais's taut 17th thriller to feature L.A. PI Elvis Cole and his cryptic sidekick, Joe Pike (after 2015's ), frantic mom Devin Connor hires Elvis to find out why her teenage son, Tyson, has a mountain of expensive clothing, cash, and a $40,000 Rolex hidden in his bedroom. It turns out that Tyson is part of a trio that has robbed 18 homes. But before Tyson can agree to surrender himself, co-robber Alec turns up dead—a victim of Harvey and Stemms, two eccentric hit men. They know the kids have stolen a laptop coded with valuable information and will joyfully kill to recover it. Panicked, Tyson goes off the grid with his girlfriend and fellow thief, Amber. Now Elvis, aided by the implacable Pike, must find the teens before Harvey and Stemms do. The empathic Elvis takes center stage, with just enough hard-boiled Pike to season the mayhem. The plot isn't Crais's most inventive, but it's still expertly crafted. Agent: Aaron Priest, Aaron M. Priest Literary Agency. (Dec.)

Dynamite roadKlavan, Andrew
A cool breeze on the undergroundWinslow, Don, 1953-