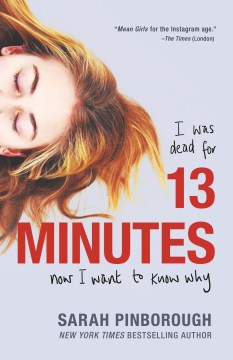 Becca and Tasha were childhood best friends, but now, in sixth form, Tasha is the ringleader of a trio of popular mean girls Becca dismissively calls the Barbies. Yet when Becca hears that Tasha is in the hospital after being revived from near drowning, she goes to see her former friend. Oddly, Tasha now wants to reconnect with her, even confiding in Becca that she suspects the Barbies are complicit in Tasha's brush with death. The intrigue unfolds through a third-person narrative that alternates with snippets from therapy sessions, text conversations, news reports, and Tasha's diary entries. Although the tone and vocabulary of these narrative voices could be interchangeable, it's a device that facilitates some dandy plot twists. Pinborough gets the overwrought drama of teen friendships right, capturing both Becca's intense feelings and her keen intelligence as she struggles to make sense of a string of seemingly unrelated tragic events. Readers drawn to the kind of debauched chicanery made popular in novels such as Gillian Flynn's Gone Girl (2012) will tear through this edgy thriller. Copyright 2017 Booklist Reviews.

Brits Becca and Natasha were best friends until Natasha dropped Becca for more fashionable companions. Years later, at sixteen, Natasha is found on the banks of a freezing river, officially dead for thirteen minutes before waking with no memory of the incident. The ensuing investigation draws Becca back into Natasha's alluring orbit. Excerpts from Natasha's diary depict her confusion, lingering trauma, and growing suspicion of Jenny and Hayley--the two girls who took Becca's place as Natasha's closest friends. Newspaper articles, text message exchanges, and interview transcripts add tantalizing and compelling details. A third-person omniscient narrator brings in the perspectives of other characters but largely positions Becca as the reluctant, vulnerable detective. Becca's internal battle--between embracing an old friend and holding onto her new, hard-earned identity--is well drawn, but her friendship drama seems petty after another teen is killed during a rehearsal of the school production of The Crucible (yes, that's relevant); it's a shocking twist, and one that will send readers flipping back to find hidden clues now made plain. A tense, gritty psychological thriller, steeped in sex, drugs, partying, and social media. jessica tackett macdonald Copyright 2017 Horn Book Magazine Reviews.

After drowning, Natasha Howland was dead for 13 minutes before being revived. As the police try to piece together what happened, Natasha, harboring suspicions about her closest friends, launches her own investigation with the help of former friend Becca, who she abandoned during an ascent into popularity. Third-person chapters focus on Becca, and readers' see Natasha's thoughts, reactions, and nagging suspicions through excerpts from a journal. Text message exchanges, news reports, and interviews between Becca and her therapist further flesh out a multilayered narrative, filling in the gaps in Natasha's memory. British author Pinborough's thrilling murder mystery is filled with twists and turns, including a surprising second death—one that sticks—that sends the novel careening into fresh and emotionally raw territory of loss, forgiveness, and guilt in its final act. But at its most basic level, this is a story of petty high school betrayals, popularity contests with toxic frenemies, and vividly depicted peer pressure, all of which combine to create a painfully real novel. Ages 17–up.

All eyes on herFlynn, Laurie Elizabeth