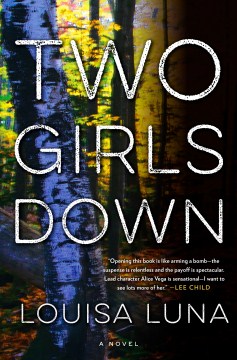 *Starred Review* Luna, known mainly for her YA novel Brave New Girl (2001), now offers an outstanding neo-noir, introducing enigmatic bounty hunter Alice Vega, a perfect female incarnation of Jack Reacher. Ultimately, it is not what she tells you about herself, but what she doesn't tell you, that makes her a riveting character. A Pennsylvania small-town police chief "who thinks he's in a James Patterson book" dismisses her as "a girl with a gun who has watched too much Buffy" but soon finds out that this woman is driven by a need to make it right that he will never fathom. She teams up with disgraced former cop turned PI Max Caplan, whose consolation for a troubled life comes in the form of a brilliant and independent teenage daughter, Nell, who finds instant intrigue in Vega. Two young sisters have disappeared from a local strip-mall parking lot. With little to go on, Vega and Cap go to extraordinary lengths in a highly unorthodox way, untangling an odd assortment of complex relationships, to rescue the girls as the hourglass drains down. Vega springs to life in the hands of this immensely talented writer. This is a must-read for fans of strong female protagonists, especially Sara Gran's Claire DeWitt and Jassy Mackenzie's Jade de Jong. Copyright 2017 Booklist Reviews.

California bounty hunter Alice Vega, who has a reputation for finding missing children, teams with disgraced detective-turned-private investigator Max Caplan to find two vanished girls, sisters Kylie and Bailey Brandt, who were abducted from a mall parking lot in a small rundown Pennsylvania town. With few witnesses and even fewer consistent stories, and little help from a local police force overwhelmed by budget cuts and a growing narcotics epidemic, Vega and Caplan track down every bit of evidence and interview many suspects in their determination to locate the girls. The slow pacing is deliberate, adding to the growing suspense, as the story line ultimately builds to a surprising conclusion. The omniscient third-person narrative allows a look into the main protagonists' thoughts and feelings, but readers should pay attention to the many supporting and minor characters as well, as the roles they play add to the intensity. In her adult fiction debut, YA author Luna (Brave New Girl; Crooked) offers a fresh take on the typical procedural drama by introducing flawed investigators who work independently of traditional law enforcement. Readers who loved Rene Denfeld's The Child Finder might enjoy this gritty take.—Natalie Browning, Longwood Univ. Lib., Farmville, VA

Best known as a YA author, Luna () ventures into adult thriller territory with a real nail-biter. Single mother Jamie Brandt parks in a shopping center in Denville, Pa., leaving her two daughters—10-year-old Kylie and eight-year-old Bailey—in the car while she goes into a Kmart to buy a birthday present. When she returns to the car, the children have disappeared. The devastated Jamie's take-charge aunt, Maggie Shambley, asks California bounty hunter Alice Vega to locate the girls. The complicated, blunt-talking Alice, who may be on the autism spectrum, has an uncanny knack for finding people. When the Denville police chief rejects Alice's help, despite being besieged by budget cuts, low morale, and a rising oxycodone and meth epidemic, she teams up with Max Caplan, a disgraced former cop turned PI who knows the local area. Luna nicely charts how the aloof Alice comes to embrace a personal relationship. The brisk plot combines psychological suspense with solid action, while providing a realistic look at a family under siege, as it builds to a shocking finale.

A gathering of secretsCastillo, Linda