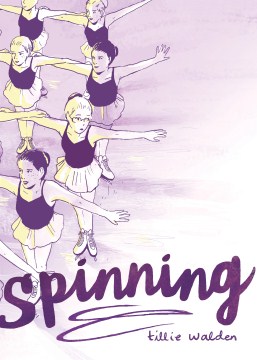 *Starred Review* Award-winning Walden's first book-length work traces her childhood spent in the competitive figure-skating world, and although most of her memoir happens in skating rinks or at competitions, that element ultimately becomes the backdrop for a deeper story about her coming out and coming-of-age. In delicate, evocative artwork, rendered exclusively in purple with yellow highlights, Walden relates the struggles of moving to a new city in middle school, dealing with a particularly cruel bully, feeling scared to be open about her homosexuality, and so on, all while gradually becoming disillusioned with skating. She uses negative space to great effect, elegantly depicting her loneliness and isolation while simultaneously emphasizing how deeply she feels unable to speak up for herself. Subtle hints of her burgeoning interest in art, depicted in small, fine-lined doodles encroaching on the edges of panels and pages, are a tantalizing glimpse into what readers know she'll become. All these feelings play out compellingly on the ice, and chapter-heading descriptions of skating moves seem to hint at Walden's larger emotional development. The overall effect is quiet and lyrical—there aren't many huge epiphanies, and conflicts disappear rather quickly—but Walden's cumulative growth and courage to speak up for what she actually wants are unmistakable and deeply satisfying. A stirring, gorgeously illustrated story of finding the strength to follow one's own path. Copyright 2017 Booklist Reviews.

In a graphic memoir, former competitive figure skater and synchronized skater Walden looks back at her twelve years growing up in the world of competitive sports. The shadowy, cool bluish-purples of most of the pencil drawings reflect young Tillie's mood for much of the narrative: although she's committed to her skating, it rarely brings her joy. Meanwhile, she's being bullied; her family relationships are strained; she feels the need to hide her homosexuality; she struggles academically; and she is sexually assaulted by her SAT tutor. The skating world serves mainly as a well-realized backdrop for a story about holding secrets in and going against expectations. Walden, whose growing interest in art is a recurring theme throughout her memoir, knows when to let this book's art or text be spare and when to interrupt the purple sleepiness with a pop of golden yellow; the occasional incompletely drawn figures are clearly deliberate, whether to protect her own memory or someone else's anonymity. She sometimes only hints at her motivations, giving the impression that, like many adolescents, she's not fully sure what they are. The result is much more layered than the "tell-all about the seedy world of glittering young ice skaters" that, according to the author's note, Walden (now only a few years removed from the events) originally intended to create. shoshana flax Copyright 2017 Horn Book Magazine Reviews.

In an elegant, contemplative, and somber graphic memoir, Walden () immerses readers in an adolescence dominated by competitive figure skating. The story stretches over several years, during which time Walden vacillates between embracing the routine of early morning practices and the rush of competition, and a near-constant feeling of otherness, due in large part to her attraction to girls, which she hides from her family and peers. "It wasn't the thrill or freedom I felt that I remember," she notes after making a romantic connection with a friend. "It was the fear." Chapters open with illustrations of spins and jumps, the movements delicately mapped, paired with commentary that, at times, gives insight into Walden's personal life; of the frustrating axel, she writes, "As I would turn to go into it I would wish and hope with everything I had that this time it would work." A palette of deep purple, splashed with yellow, underscores the loneliness that permeates Walden's story, and her careful attention to facial expressions and body language makes readers intimately aware of what she is feeling. A haunting and resonant coming-of-age story. Ages 14–up.

Being Jazz: my life as a (transgender) teenJennings, Jazz

Hey, kiddo: how I lost my mother, found my father, and dealt with family addictionKrosoczka, Jarrett

Some assembly required: the not-so-secret life of a transgender teenAndrews, Arin

Lighter than my shadowGreen, Katie, (Illustrator)

Diary of a Tokyo teen: a Japanese-American girl travels to the land of trendy fashion, high-tech toilets and maid cafesInzer, Christine Mari