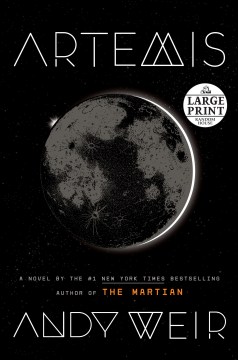 *Starred Review* Jazz Bashara grew up in Artemis, the only city on the moon. She's a young, misanthropic, underachieving genius who side-hustles as a smuggler. One day, she takes on a job that proves too dangerous and finds herself wrapped up in murder and an interplanetary struggle for control over a new technology worth billions. This exciting, whip-smart, funny thrill-ride boasts a wonderful cast of characters, a wide cultural milieu, and the appeal of a striking young woman as the main character. It's one of the best science fiction novels of the year—but to make it clear, Artemis is not The Martian (2011) redux. Tone, characters, structure are all very different. It's more traditional sf and lacks the cheery novelty that characterized Weir's famous first novel. The setting is just as detailed and scientifically realistic, but science isn't the focus this time. Weir's sarcastic humor is on full display, but Jazz delivers it with an anger that Watney (The Martian's protagonist) never had. The Martian appealed to a broad audience beyond regular sf fans, and Weir's second novel will be in high demand, thanks to that, though it may not be to everyone's taste. Copyright 2017 Booklist Reviews.

A huge hit at BookExpo delivered to us by the Martian man himself, this November title (I just caught up with it) is set in Artemis, the first and as yet only city on the moon. Jazz Bashara can't quite get by with the salary she earns as a porter and does the odd bit of smuggling to make ends meet. She can't resist the chance to haul in some serious cash by committing the perfect crime, but soon there's trouble: she's stepped into a hornet's nest of a conspiracy to control the city itself. With 3.5 million copies of The Martian out there, you know this will be hot.

In 2014, Weir astounded readers with his brilliant and best-selling debut novel, The Martian, which was turned into a blockbuster movie. Now sf fans everywhere can once again rejoice because he's done it again. This time the action takes place a little closer to home—on the moon. Jazz Bashara lives and works in Artemis, the first and only city on the moon, as a full-time porter and part-time smuggler of Earth luxuries. But Jazz has dreams of moving up and out of her tiny sleeping space in Conrad Down 15, which she describes as "shitty with overtones of failure and poor life decisions." A financial opportunity knocks when high-level businessman Trond hires her to sabotage Sanchez Aluminum's harvesters. But there's a catch—Sanchez Aluminum is owned by O Palacio, Brazil's most powerfully organized crime syndicate. Of course, Jazz takes the job, which leads to much mayhem, high jinks, the overthrow of the beloved (and morally dubious) Artemis administrator, and the potential death of everyone on the moon. Narrated by a kick-ass leading lady, this thriller has it all—a smart plot, laugh-out-loud funny moments, and really cool science. A four-star read. [See Prepub Alert, 6/12/17; "Editors' Fall Picks," 9/1/17.]—Jane Henriksen Baird, Anchorage P.L., AK

Jazz Bashara, the heroine of this superior near-future thriller from bestseller Weir (), grew up in Artemis, the moon's only city, where she dreams of becoming rich. For now, she works as a porter, supplementing her legal income by smuggling contraband. She hopes that her situation can improve drastically after she's offered an impossible-to-refuse payday by wealthy entrepreneur Trond Landvik, who has used her in the past to get cigars from Earth. Trond asks Jazz to come up with a way to sabotage a competitor so that he can take over the moon's aluminum industry. She develops an elaborate and clever plan that showcases her resourcefulness and intelligence, even as she continues to have misgivings about her client's true agenda, suspicions borne out by subsequent complications. The sophisticated worldbuilding incorporates politics and economics, as well as scientifically plausible ways for a small city to function on the lunar surface. The independent, wisecracking lead could easily sustain a series. Weir leavens the hard SF with a healthy dose of humor.

Up against itLocke, M. J.