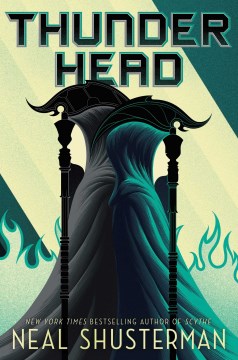 *Starred Review* Shusterman follows up his Printz Honor Book Scythe (2016) with that most difficult of feats: a sequel that surpasses its predecessor. Where the first book focused on the titular scythes tasked with gleaning lives to control populations in a future where death has been vanquished, the second installment delves into the inner workings of the Thunderhead, the sentient cloud that smoothly operates all of society. The plot is straightforward: Rowan, a rogue ex-scythe apprentice, stalks the streets of MidMerica taking the lives of the scythes who have lost sight of their mission and kill for pleasure or personal gain. Citra, once his counterpart, is now the ordained Scythe Anastasia, and as she works to better the system from the inside, her own life may be in danger. But it is the Thunderhead—part government and part god, almost all-knowing, and increasingly aware of its own limitations—that commands the most attention, and it is pulling strings across the globe. Through the Thunderhead, Shusterman widens the already impressive scope of his near-future utopia while also keeping a deft finger on the pulse of our own turbulent times. Exceptionally clear-eyed and brutal in its execution, this raises even bigger moral questions than its predecessor—and, like its predecessor, offers no easy answers. HIGH-DEMAND BACKSTORY: There's no doubting Shusterman's talents—he's nabbed both a National Book Award and a Printz Honor Book—and this sequel to an enthusiastically received series starter is eagerly awaited. Copyright 2017 Booklist Reviews.

In this sequel to Scythe, Citra (revived as Scythe Anastasia) and her mentor, Scythe Curie, are the target of assassination attempts. Rowan has gone rogue, fleeing underground and taking the moniker Scythe Lucifer to glean unethical and unworthy scythes. Through excellent storytelling, Shusterman deepens the world-building and raises ethical questions about this society's foundations. He expertly weaves narrative strands together, culminating with the requisite cliffhanger. Copyright 2018 Horn Book Guide Reviews.

When Rowan killed Citra at the end of Scythe (rev. 11/16), it ended their competition for a single spot in the scythedom. In this sequel, Citra is revived and anointed Scythe Anastasia, while Rowan goes rogue and flees underground, taking the moniker Scythe Lucifer and gleaning only unethical and unworthy scythes. Anastasia and her mentor, Scythe Curie, find themselves the target of assassination attempts ahead of a surprising announcement by High Blade Xenocrates that he will resign to take a promotion to Grandslayer. Curie is the obvious "old guard" candidate to replace him, and as the "new order" faction puts their candidate forward, the plot quickly coalesces around the Machiavellian struggle to gain the upper hand. Meanwhile, Scythe Faraday remains in hiding, looking for knowledge from the founding scythes, and the Thunderhead (the god-like technology that governs and regulates society) is searching for answers, too; both lines of inquiry serve to deepen the world-building and raise questions about the foundations of this society. Shusterman expertly weaves the various narrative strands together, culminating with the requisite cliffhanger, and the excellent storytelling is complemented by ethical considerations of power, corruption, and virtue at both individual and global levels. jonathan hunt Copyright 2018 Horn Book Magazine Reviews.

Shusterman cranks up the stakes in this blistering sequel to 2016's , set on a "post-mortal" future Earth in which easily revived humans are only "deadish" when killed, not permanently dead, except for the few "gleaned" by scythes, who kill to keep population growth under control. The narrative focuses primarily on Citra, who is gaining influence as Scythe Anastasia, and Rowan, who has adopted the mantle of Scythe Lucifer as he furtively gleans amoral scythes. New presences include Greyson Tolliver, an unassuming young man who becomes aware of threats on Scythe Anastasia's life, and the voice of the Thunderhead, the artificial intelligence that manages virtually all aspects of life on Earth. As the political machinations between scythe factions collide, the Thunderhead's dispatches reflect powerfully on its relationship with humanity ("All I can do is watch unblinkingly as my beloved humankind slowly weaves the rope it will use to hang itself"). Interweaving heady questions of morality, responsibility, loyalty, and power, Shusterman builds to a devastatingly intense conclusion that sends the characters and larger world into terrifying new territory. It's difficult to fathom what awaits in the next book. Ages 12–up.