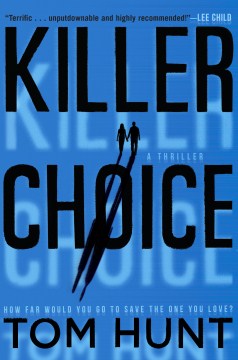 *Starred Review* This outstanding domestic suspense debut by an award-winning advertising copywriter is at once complex and direct. With a baby finally on the way and a new retail business venture with his brother established, Gary Foster has no idea that his low-key life is about to be turned upside down. When his wife is diagnosed with an inoperable brain tumor, Gary concludes that the only good option is an alternative treatment that comes with the staggering price tag of $200,000. They undertake charitable and crowd-funding appeals but have exhausted themselves and their options with barely $20,000 to show for their efforts. The clock is ticking, and Gary's desperation to save Beth and their unborn son leads him down a criminal path. Then a man offers him the money he needs if he will kill someone, who turns out to be a crooked cop. In the harrowing tale that follows, the readers are craftily put in the position of considering what extremes they would go to in the same hopeless situation. The writer is totally nonjudgmental of Gary, but he has created some characters so loathsome that they beg the question of whether ridding society of them would be such a bad thing. Recommended for fans of fast-paced thrillers that pose moral dilemmas (Lee Child, Harlan Coben, Joseph Finder). A real nail-biter. Copyright 2017 Booklist Reviews.

Say your pregnant wife has an inoperable brain tumor, and the experimental treatment that's her only chance costs $200,000. If someone offered you the money to kill someone, would you take it? In-house folks are jumping.

Under what circumstances would you kill for someone you love? This is the question that Gary Foster must ask himself in this first novel. Gary's pregnant wife, Beth, has been diagnosed with a rare and inoperable cancer. An experimental treatment will cost more than they could afford. Out of the blue, a shadowy figure offers Gary a deal: kill this stranger, get paid the exact amount he needs. Gary is given just two days to consider the offer and the moral dilemma it represents. Accepting the deal, he agrees to commit the murder of a "bad man" for the money to save his wife, a "good woman." Gary is only human, though, and not being a criminal at heart, he makes many mistakes. What if the mysterious person doesn't pay? Although the protagonist falls just short of being sympathetic, the story moves along rapidly. Fans of Harlan Coben or Mary Kubica will want to add this promising author to their lineup of favorites. [See Prepub Alert, 7/24/17.]

The future looks bright for Gary Foster, the hero of Hunt's engrossing, if flawed, first novel. He owns a small retail business in his hometown of River Falls, Mich., with his brother, and his wife, Beth, is pregnant with their first child. Then Gary gets a call from the local hospital, where an ambulance has taken Beth after she collapsed and went into convulsions at a shopping mall. Tests soon show that Beth has a rare form of inoperable brain cancer. The couple's only hope for her survival is an experimental treatment that costs $200,000, which their insurance won't cover. Gary's life becomes a nightmare as he and Beth futilely try to raise the money. Meanwhile, a stranger approaches him with a Faustian bargain: if he murders a man, the money to save his wife is his. Hunt does a fine job of maintaining tension and dread throughout, though some thriller fans will be disappointed that the straightforward plot builds to a predictable, anticlimactic conclusion. Agent: Laney Katz Becker, Massie & McQuilkin. (Jan.)