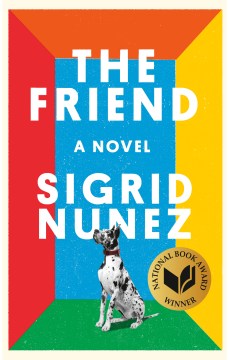 The narrator's friend, a famous writer at the height of a long and successful career, killed himself and left no suicide note. What he did leave was a jealous wife and a Great Dane named Apollo, adopted when the narrator found him abandoned in the park. The wife won't keep the dog. So, driven by guilt and grief, the narrator opts to take him, even at the risk of losing her rent-controlled apartment. She can't bear the idea of another abandonment while she herself feels abandoned. They set off to build a relationship and get through their mutual grief. In rambling streams of consciousness, she recalls her relationship with the writer as a former student, a longtime friend, and a fellow writer. Onlookers wonder at the human-canine friendship, even as the narrator plunges into an existential crisis, examining her own life, writing, and the bond between dogs and humans. Adjusting and adapting, she and Apollo ultimately find comfort and salvation. Nunez (Sempre Susan, 2011) offers an often-hilarious, always-penetrating look at writing, grief, and the companionship of dogs. Copyright 2018 Booklist Reviews.

This is very much a writer's novel. The unnamed narrator is an author who teaches composition, as is the eponymous friend. They met in a college writing class—she a student, he the professor—and he went on to marry another student from the same class. This would be one of his three wives, only referred to as "wife one," "wife two," and "wife three." Wife three was married to the friend when he committed suicide unexpectedly, leaving behind a Great Dane he'd recently adopted. The narrator takes the dog reluctantly and begins a journey of self-discovery. In the hands of many authors, a premise like this would be corny, but Nunez (; ) has a subtle, ironic tone that makes it work. Was she in love with her friend? Was he a terrible person, or is the narrator exaggerating because he has died? These answers aren't important, and not much happens in terms of plot. Instead, this is a slow, poignant meditation on grief, rife with pithy literary myths and quotations. Literature nerds, creative writing students, and dog lovers will find this work delightful. Recommended for literary fiction collections.

In the riveting new novel from Nunez (), the unnamed narrator thinks in the second person, addressing an unnamed old friend, a man, who has recently and unexpectedly committed suicide. The two first met decades earlier, while she was his student, the same semester in fact, when a fellow student became "Wife One" of three. While wives and lovers have come and gone, the narrator has remained a constant, friendly intimate of the deceased, a platonic yet intense and complex relationship. Mourning, she begins writing a cathartic elegy that becomes a larger meditation on writing, loss, and various forms of love. Early in the book, Wife Three calls to ask if the narrator will take responsibility for a large Great Dane named Apollo, whom the man had found abandoned in Central Park. Despite the unexpectedness of the request, the narrator takes the dog home, and over the course of the rest of the novel, her love for Apollo both consumes and heals her. This elegant novel explores both rich memories and day-to-day mundanity, reflecting the way that, especially in grief, the past is often more vibrant than the present.

Lily and the octopusRowley, Steven, 1971-

To dance with the white dogKay, Terry

The dogs of BabelParkhurst, Carolyn, 1971-

Our souls at nightHaruf, Kent

Grief is the thing with feathersPorter, Max, 1981-