Draft no. 4 : on the writing process / John McPhee. 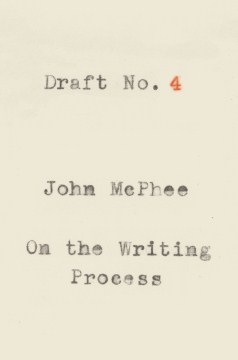 A Pulitzer Prize winner in general nonfiction, George Polk Career Award winner, and longtime staff writer at The New Yorker, McPhee continues to define American journalism today; many of the students who have taken his course at Princeton have gone on to significant roles in media. Here, McPhee gathers everything he's learned from decades of writing and teaching to analyze the writing process.

In the tradition of William Strunk Jr. and E. B. White, who enlivened modern writing with The Elements of Style, McPhee (Encounters with the Archdruid) has set the standard for the genre of creative nonfiction. In this collection of essays, previously published in The New Yorker, McPhee reflects on his experience writing long-form nonfiction books and magazine articles. The Pulitzer Prize-winning author, who started at Time magazine, draws insights into the writing process from his career at The New Yorker and teaching writing at Princeton University. With humor and aplomb, he recalls anecdotes about how he approached a story: from interviewing and reporting to drafting and revising, to working with editors and publishers. These essays reveal how his personal experiences and observations informed and shaped his groundbreaking prose. Aspiring authors expecting a step-by-step manual on how to write and publish nonfiction will have to look elsewhere. Here they will find a well-wrought road map to navigating the twists and turns, thrills and pitfalls, and joys and sorrows of the writer's journey. [See Prepub Alert, 3/20/17.]—Donna Marie Smith, Palm Beach Cty. Lib. Syst., FL

McPhee (), a staff writer at the and journalism professor at Princeton, offers here not a general how-to-do-it manual but a personal how-I-did-it of richer depth—not bouillon cubes, but rich stock. Some of McPhee's famous profile subjects (Woody Allen, Jackie Gleason) wander through the narrative, but only tangentially to the main subject, which is always writing. McPhee reveals a life spent with publishers, copy editors, fact checkers, and even "minders," those "watchdogs in coats and ties whose presence is a condition for an interview." He also uncovers the special world of magazines, notably the when the legendary William Shawn reigned. He attends to technique, wrestling with tools of the journalistic trade (e.g., voice recorder, computer) while confessing his "basic technology" to be "a pencil and a lined four-by-six notebook." McPhee the teacher is a presence throughout, though rarely proscriptive. Questions guide—what must you put in, and leave out? How to handle your subject's own words? Along with specific advice, there is an implied and comforting message: that for most writers, this is not easy. McPhee lays it all out with the wit of one who believes that "writing has to be fun at least once in a pale blue moon." (Sept.)