The elegance of the hedgehog / Muriel Barbery ; translated from the French by Alison Anderson. 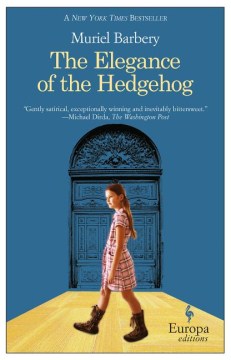 In a bourgeois apartment building in Paris, we encounter RenÃ©e, an intelligent, philosophical, and cultured concierge who masks herself as the stereotypical uneducated â€œsuperâ€ to avoid suspicion from the building's pretentious inhabitants. Also living in the building is Paloma, the adolescent daughter of a parliamentarian, who has decided to commit suicide on her thirteenth birthday because she cannot bear to live among the rich. Although they are passing strangers, it is through RenÃ©e's observations and Paloma's journal entries that The Elegance of the Hedgehog reveals the absurd lives of the wealthy. That is until a Japanese businessman moves into the building and brings the two characters together. A critical success in France, the novel may strike a different chord with some readers in the U.S. The plot thins at moments and is supplanted with philosophical discourse on culture, the ruling class, and the injustices done to the poor, leaving the reader enlightened on Kant but disappointed with the story at hand. Copyright 2006 Booklist Reviews.

Published in France in 2006, this work quickly captured the European imagination, and the advance praise is sufficiently glowing to guarantee attention in the English-speaking world. The novel itself is more problematic. Philosophy professor Barbery—the author of one previous novel, Une gourmandise —has fashioned a slow and sentimental fable out of her own personal interests—art, philosophy, and Japanese culture—about a widow who serves as caretaker of a Parisian apartment building and a troubled girl living in the building. Barbery attempts to make the story appear more cutting-edge by introducing dizzying changes in typography, but the effect seems precious from the outset and quickly grow tiresome. Recommended for public libraries where literature in translation is in demand and for academic libraries to complement their French collections.—Sam Popowich, Univ. of Ottawa Lib., Ont.

This dark but redemptive novel, an international bestseller, marks the debut in English of Normandy philosophy professor Barbery. Rene Michel, 54 and widowed, is the stolid concierge in an elegant Paris htel particulier . Though "short, ugly, and plump," Rene has, as she says, "always been poor," but she has a secret: she's a ferocious autodidact who's better versed in literature and the arts than any of the building's snobby residents. Meanwhile, "supersmart" 12-year-old Paloma Josse, who switches off narration with Rene, lives in the building with her wealthy, liberal family. Having grasped life's futility early on, Paloma plans to commit suicide on her 13th birthday. The arrival of a new tenant, Kakuro Ozu, who befriends both the young pessimist and the concierge alike, sets up their possible transformations. By turns very funny (particularly in Paloma's sections) and heartbreaking, Barbery never allows either of her dour narrators to get too cerebral or too sentimental. Her simple plot and sudden denouement add up to a great deal more than the sum of their parts. (Sept.)

The cleaner of ChartresVickers, Salley