Lake Silence : the world of the Others / Anne Bishop. 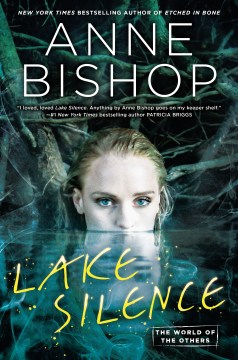 Bishop's newest installment in the best-selling Others series (after Etched in Bone, 2017) is nothing short of nail-biting fun. After fantastic creatures such as vampires and shapeshifters come out of the shadows to reveal themselves as the primary predators on Earth, humanity is learning how to adapt to the new world order and cohabitate in peace. One human bridging the gap with the Others is Vicki DeVine, a strong but battered woman who received a rustic resort near Lake Silence in a recent divorce settlement from her abusive ex-husband. Vicki restores the resort, and her business provides a safe haven for Others and humans to learn about one another on neutral ground. But when Vicki's ex and his cronies set a dangerous plot in motion to take back the resort, the humans quickly realize that the Others are in control—and will go to any lengths to remove the human threat. What follows is a fast-paced crime story unfolding against a fantasy backdrop that readers looking for a little bit of mystery to unravel will enjoy. Copyright 2018 Booklist Reviews.

Winner of the William L. Crawford Memorial Fantasy Award, Bishop revisits the "World of the Others" setting of her previous New York Times best sellers. In this world, humans live carefully, dominated by dangerous paranormals, so it's no surprise when human Vicki DeVine runs into trouble after a shape-shifter at the Lake Silence resort she's recently bought discovers the body of a murdered man.

When divorcée Vicki DeVine took over the Jumble, a rustic and somewhat rundown resort near Lake Silence, all she wished for was a quiet life for herself. But Vicki lives in Sproing, a human village controlled by the paranormal Others. As the dominant species, the Others usually keep to themselves. Usually. But now Vicki's lodger Aggie Crowe—a Crowgard Other—has found a dead man near her property, and Vicki falls under suspicion as the murderer. Vicki's new friends begin to rally around her as she finds that her business—and her life—may be at stake. But there are stronger, older forces in Lake Silence that have been disturbed, and they make the rules that must be obeyed. While leaving behind the familiar faces from her original "The Others" series, Bishop uses this series debut to build a world in which humans are not the strongest species. A solid, if familiar, tale filled with shapeshifters, vampires, and the humans who work both with and against them. Bishop's fans will be happy to return to the universe of the Others, with a new cast of characters and a fantastical suspense plot. [See Prepub Alert, 10/9/17.]

The sixth installment of Bishop's paranormal series (after 2017's ), set in an alternate upstate New York, constitutes a fresh take on a series concept that had been stalling. It is a standalone thriller, set near a village called Sproing in the Finger Lakes. New to the cast is narrator Vicki DeVine, who, unlike past protagonists, is an ordinary human woman. Recently divorced from an abusive wheeler-dealer, she has come to Lake Silence to renovate the property that constituted her settlement. The Jumble is exactly that: a dilapidated sprawl of buildings, abandoned by humans but not by the world's supernatural predators, the Others. Vicki plans to reopen it as a modest resort until a body is discovered on her land. Abruptly, this unassuming, hesitant woman must cope with a police investigation as well as a conspiracy by developers to seize the Jumble. Many core elements of prior plots are intact, notably the Others' inevitable dominance, which dampens the tension. But the pleasures of these books have always lain in worldbuilding and character growth. Centering these on a woman liberating herself (personally and professionally) from abuse makes this episode unexpectedly timely.

The shape of desireShinn, Sharon