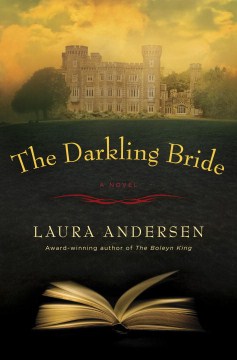 Before Deerprath Castle, the ancestral home of the Gallaghers, is turned over to the Irish National Trust, Carragh Ryan arrives to catalog the contents of the library. She has taken the job because of the castle's connection with Evan Chase, author of gothic tales, who, having come to Deerprath to research a legend called the Darkling Bride, married the possibly mad, and soon dead, Jenny Gallagher back in the 1880s. Also converging on the castle in the present day are Aidan, the sexy Viscount Gallagher, taking a break from his job at Scotland Yard in order to retrieve some family papers from the library, and DI Sibéal McKenna, who has been tasked with reinvestigating the unsolved murder, or murder-suicide, of Aidan's parents when he was a child. As Carragh delves deeper into questions surrounding the castle's unexplained deaths, she also unearths secrets that some Gallaghers would prefer stay buried. The novel is overfurnished with plot points, but Andersen, author of the popular Boleyn trilogy (starting with The Boleyn King, 2013), provides a well-realized setting and plenty of puzzles to keep readers engaged. Copyright 2018 Booklist Reviews.

Deeprath Castle, located deep in the Irish countryside, has belonged to the Gallagher family since the Middle Ages. Shrouded in fog and mystery, the castle has been the site of numerous tragedies through the generations, including two apparent suicides and a brutal murder. When the current lord of the manor, Aidan Gallagher, decides to donate the property to the National Trust, his stern-faced aunt hires Carragh Ryan, a likable, curious bookworm, to catalog Deeprath's extensive library. This series of events sets off an unexpected journey through the past, threaded with exceptional skill through historical and contemporary story lines and multiple points of view, including a determined and pragmatic female detective. Andersen is best known for her alternate Tudor history novels; this is her first foray into gothic suspense. Eloquent, atmospheric, and suspenseful, this is the perfect read for fans of Kate Morton and Lucinda Riley.

Atmosphere doesn't come any more dark and dank than in this gothic novel from Andersen () that takes place in a Scottish castle riddled with secrets and haunted by ghosts. Hired to catalog the library at Deeprath Castle, Carragh Ryan, a Chinese-American academic, early on proclaims, "I'm here for the library. Not for men, and not for ghosts." But her work will involve her with both, the former in the person of the handsome, brooding Viscount Aidan Gallagher, a London art cop who inherited his title and the castle 23 years ago after the mysterious deaths of his parents. The ghosts arrive via a haunted local folktale, that of the Darkling Bride. In a parallel narrative set in 1879, English novelist Evan Chase comes to Deeprath Castle pursuing the legend and falls in love with its young mistress, Jenny Gallagher, who meets an untimely death. In the present, Carragh and Aidan team up to get to the bottom of all three deaths and their ties to the legend of the Darkling Bride. Andersen () has plenty of surprises up her sleeve to keep the reader entertained on the way to a suspenseful ending, including hypnosis, a changeling, and—of course—ghosts.

The shape of nightGerritsen, Tess

A discovery of witchesHarkness, Deborah E., 1965-