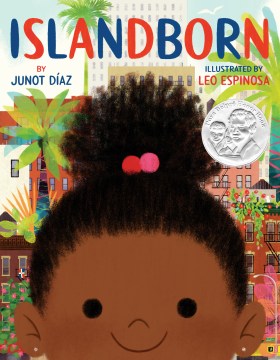 *Starred Review* Lola attends a school in which the majority of students, whose skin tones range from tan to deep brown, are "from somewhere else." When the teacher instructs her class to draw a picture of what each child's original country looks like, the young girl is stymied. She was an infant when her family immigrated to the U.S. and has no memories of her birthplace. As Lola and her cousin walk home through their neighborhood, they discover that almost everyone is happy to share their memories of "the Island." The beaches, the music, the fruits, and the colors come alive for the youngster and create a feeling of pride in her heritage. Along with all the happy memories are remembrances of struggles after a hurricane and a defeated "monster," which adults may recognize as a former dictator. The exuberant, brightly colored illustrations are filled with a child's interpretation of the memories and fill the double-page spreads with details to pore over. This important title will be enjoyed by young children and may spark many significant discussions. Copyright 2018 Booklist Reviews.

Spanish-language edition translated by Teresa Mlawer. In an unnamed U.S. city, Lola is given homework to draw "the country you are originally from," which Lola doesn't remember. The elderly apartment-building superintendent finally tells her "a monster"--a stand in for political destabilization--"fell upon our poor Island"; Lola's concluding drawing shows her homeland (likely the Dominican Republic) in its complexity. A welcome community and immigration story with vibrant illustrations of city and island life. Also available in Spanish. Copyright 2018 Horn Book Guide Reviews.

Lola's school, in an unnamed U.S. city, is full of immigrants like her. For homework one day, Ms. Obi tasks her young students with drawing "a picture of the country you are originally from." Lola has a problem: because she left "the Island" when she was a baby, she doesn't remember it. Fortunately, she can tap the memories of her family members and neighbors, all eager to help…except for elderly building superintendent Mr. Mir ("Nobody cares about that old stuff…Just be glad that you live here"). When Mr. Mir finally agrees to speak with Lola, he relates something no one else has: that "a monster fell upon our poor Island," terrorizing it for thirty years; the creature was defeated only when "heroes rose up." That monster is the piece missing from Lola's until-now glossy portrait, and her drawing, which concludes the book, shows her homeland in its complexity: revelers, animals, and greenery share the two-page spread with activists smiting a fanged enemy. Although the island is likely a nod to the Dominican Republic, whence hails Pulitzer Prize–winner Díaz (The Brief and Wondrous Life of Oscar Wao), the monster can stand in for any country's political destabilization. Islandborn (concurrently published in Spanish as Lola), whose pages hustle and bustle with Espinosa's vibrant illustrations of city and island life, is a welcome community and immigration story in which a young character's existential concerns stem not from being different but from losing what makes her so by diminished connection to the past. nell beram Copyright 2018 Horn Book Magazine Reviews.

From its very first sentence, this first picture book from Díaz () is both beautifully nuanced and instantly comprehensible: "Every kid in Lola's school was from somewhere else." Lola is from a place that she calls the Island, which adult readers will recognize as the author's native Dominican Republic, but she left as a baby. When her teacher asks everyone to draw a picture of "the country you were originally from, your first country," Lola, who doesn't remember the Island herself, embarks on a quest through her tight-knit city neighborhood to collect memories. Many recall the Island with fondness: nonstop music, mangoes so sweet "they make you want to cry," colors of every kind. "Even the people are like a rainbow," says one. But Lola also hears stories of fear, hardship, and sadness; the super in her building recalls a reign of terror by what he calls "the Monster" (dictator Rafael Trujillo) and the courage it took to resist. As the story moves between past and present, the Island and "the North," and the microworlds of classroom, streets, and home, the sweep of experience and emotion becomes unmistakably novelistic. Reminiscence, reality, and Lola's imagination similarly merge in Espinosa's effervescent, mural-like drawings (which eventually become the work Lola presents to her class): bats soar through the air on blanket wings, and a barbershop customer tears up while clutching a translucent mango. With his tenacious, curious heroine and a voice that's chatty, passionate, wise, and loving, Díaz entices readers to think about a fundamental human question: what does it mean to belong? Lola realizes it means both being cherished by those around her and taking ownership of their collective memory. "Even if I'd never set foot on the Island," she tells the class, "it doesn't matter: The Island is me."

Stella brings the family: a tale of two dads on Mother's DaySchiffer, Miriam B.

Alma and how she got her nameMartinez-Neal, Juana