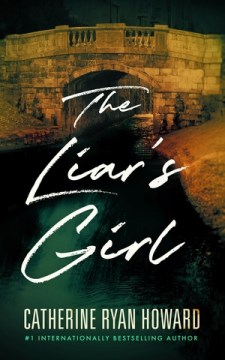 Ten years earlier Alison Smith, a first-year student at St. John's College in Dublin, fled her past for a new life in the Netherlands. Five young Dublin women had been murdered, with their bodies found in the Grand Canal, the last of them being Alison's best friend from childhood, Liz. When Will Hurley, Alison's first real boyfriend and inseparable companion for months, confessed to being the Canal Killer, Alison desperately needed to escape the label of the girlfriend who suspected nothing. But when apparent copycat murders begin again in Dublin, and police want assistance from Will (who's confined to a psychiatric hospital), they need Alison's help, for Will refuses to talk to anyone but her. Alison reluctantly gives up her anonymity when she returns to Ireland, assuaging guilt about giving testimony that incriminated Will by turning investigator as she tries to sort through her emotions and revisit her complex relationship with Liz. Howard (Distress Signals, 2017) toggles smoothly between past and present, and between Alison and the perpetrator, revealing the extent of the lies only in the final pages. Another impressive writer to watch in the thriller genre. Copyright 2018 Booklist Reviews.

Ten years ago, Alison's college lover, Will, was jailed as a serial killer. Four young women were drowned in Dublin's Grand Canal, and Will confessed to the crimes. Alison left school and scuttled to a new life abroad. When the murders begin again, the police call Alison back to reopen the case, beginning with a reinterview of Will. After many flashbacks, readers are left to wonder, was Will innocent? What really happened the night Alison's friend Liz was killed? Can the dashing Garda (police officer) Malone find the clues? This interesting twist on the college campus thriller leaves the reader craving answers to the tantalizing questions posed by Irish novelist Howard (Distress Signals). Finding that she's been sleeping with a serial killer, with her best friend as the first victim, puts the central character in a shocking predicament. And being forced to confront the crime after ten years plays out a satisfying and tightly wound tale. Readers of Paula Hawkins, Tana French, and Ruth Ware will love this exceptionally well-crafted thriller.

Alison Smith, the narrator of this exceptional thriller from Irish author Howard (), is a student at St. John's College in Dublin. After a friend of Alison's becomes the latest victim of a serial killer who knocks women on the head and drowns them in Dublin's Grand Canal, Alison's boyfriend, 19-year-old Will Hurley, confesses to the crimes. Alison flees to the Netherlands to escape the shame she feels over not knowing the "true" Will. Ten years later, two women are found in the Grand Canal, killed in the very same way as those before. At the request of two detectives, Alison reluctantly returns to Dublin, where the imprisoned Will claims to have information pertaining to the murders that he will tell only her. Thrust back into the nightmare of her past, Alison assists the police in their effort to uncover whether a copycat killer is at work—or whether Will was unjustly convicted. Howard keeps the reader turning the pages right through to the shocking and satisfying resolution. Agent: Jane Gregory, Gregory & Company (U.K.). (Feb.)

The silence of the lambsHarris, Thomas, 1940-

The life I left behindMcBeth, Colette