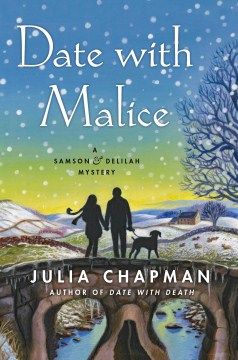 PI Samson O'Brien, the black sheep of Bruncliffe in the Yorkshire Dales, is still regarded suspiciously by some villagers despite having successfully solved a murder in the series opener, Date with Death (2017). So it's a pleasant surprise for him to get two cases one morning: Alice Shepherd, a resident at the Fellside Court retirement home, contends that someone intends to kill her, and farmer Clive Knowles reports that Ralph is missing once again. O'Brien's pleasure is lessened when he realizes that Mrs. Shepherd is clearly confused, and that Ralph (also the name of Knowles' late father) is a prize-winning ram who has been failing to impregnate the farms' ewes. Still, O'Brien pursues both cases, focusing particularly on Fellside Court after Mrs. Shepherd is found dead, and other residents appear to be at risk. Assistance, sometimes unwanted, is provided by Delilah Metcalfe, O'Brien's landlady and proprietor of the Dales Dating Agency (sometimes mistaken for O'Brien's Dales Detective Agency), along with her separation-anxiety-suffering Weimaraner, Tolpuddle. Well-drawn characters and a light tone make this English village mystery a particular pleasure. Copyright 2018 Booklist Reviews.

Samson O'Brien has two new cases at his Dales Detective Agency. Alice Shepherd, a resident of the senior independent living home, insists someone is trying to kill her. And a local farmer's prize ram is missing. In the Yorkshire Dales, the ram is vital to livelihood, while Alice is forgetful and elderly. Then Alice dies. After another member of the community ends up hospitalized, Samson's landlady Delilah Metcalfe and the seniors at Fellside Court join him in an undercover investigation. The likable duo from return in this delightful atmospheric English mystery with dark undercurrents. The romantic undertones to the feisty relationship between Samson, a suspended cop, and Delilah, the owner of a dating agency, leavens the novel's uneasy mood with humor. The smooth transition in perspectives among the characters allows readers to develop a sense of the local community, while also allowing the two leads to maintain secrets that foreshadow trouble in future books. Mystery readers who love to escape to Louise Penny's village of Three Pines will enjoy becoming acquainted with the Dales town of Bruncliffe and its quirky residents. The ongoing suspenseful story line will keep series fans hooked.

Set in the Yorkshire Dales, Chapman's well-paced sequel to 2017's finds Samson O'Brien, a London policeman suspended from the National Crime Agency, struggling in his new career as a private detective. The two cases he has aren't inspiring. Elderly Alice Shepherd, who resides at Fellside Court, a local retirement complex, asks Samson to prove her claim that someone is trying to kill her. Irascible farmer Clive Knowles wants him to locate his missing prize-winning ram. Alice's subsequent collapse in her apartment is but the first of several unsettling incidents at Fellside Court, and Samson comes to suspect that Knowles is pulling the wool over his eyes. Meanwhile, Samson's landlady, Delilah Metcalfe, who develops websites and runs a dating service, worms her way into both investigations. Sparks fly as the two friends pursue their separate, if often overlapping, lines of inquiry. Chapman doesn't sustain the Yorkshire dialect after the first chapter or two, but she vividly describes Yorkshire in winter. Cozy fans looking for good, clean fun will be satisfied.

Aunt Dimity and the next of kinAtherton, Nancy

The fine art of murder: a Katherine Sullivan mysteryBarnes, Emily

Murder in her stockingMcKevett, G. A.

Buried in a bogConnolly, Sheila