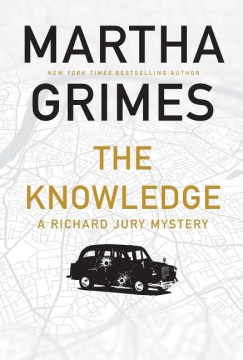 Mystery Writers of America Grand Master Grimes' twenty-fourth mystery starring Richard Jury gets off to a breakneck start, with London cab driver Robbie Parsons picking up, first, a well-heeled American couple and dropping them off at an exclusive casino. Robbie then witnesses the couple dropping to the ground, dead from gunshot wounds. His next passenger is the gunman, who orders Robbie to drive through London. Besides the fast action, it's fascinating to see how Robbie uses a London cabdriver's deep familiarity with the streets ("the Knowledge") to keep himself alive. Things span out from here. The gunman escapes into Waterloo Station. Detective Superintendent Jury takes on the case, which moves into Tanzania, Nairobi, Reno, and a London pub. (Longtime Grimes readers will remember that there is always a pub connection.) The flaw in the mystery is that it goes too far afield from Jury's usual stomping grounds, mixing in some of the jumpier elements of spy thrillers with police procedure and somewhat blurring the impact of the action. Still, Jury's devoted readership will find much to enjoy. Copyright 2018 Booklist Reviews.

This latest from Mystery Writers of America Grand Master Grimes opens in a London cab whose driver knows every winding byway (the title references not just a pub only black cabbies can find but the famously onerous test London cabbies must take). The passenger has just committed a crime and is planning his escape to Nairobi. Enter D.S. Richard Jury.

Grimes's latest "Richard Jury" mystery (after ) is a salute to those who drive the famous black cabs of London after passing the rigorous training course known as the Knowledge. The story begins with a glamorous couple, having emerged from the back of a black taxi, being gunned down in front of an exclusive London casino/art gallery. The shooter then gets in the cab and demands to be driven to several sites around London. He is followed by a clutch of cabbies and a gaggle of children who keep tabs on him, including the redoubtable ten-year-old Patty Haigh, who cajoles her way aboard a flight to Africa in pursuit of the killer. Before it's all resolved, readers are introduced to the erratic streets of London, astrophysics, the blue gemstone tanzanite, and the comfort of first-class travel on Emirates Airlines. Fans of Richard Jury should enjoy this new entry. Others will find a convoluted plot enlivened by fetching bit players, especially Patty, who comes equipped with a backpack overflowing with wigs, glitter, multiple pairs of glasses, and enough chutzpah to make even Baby Rose Marie look sedate. [Library marketing; five-city tour.]

The shooting death of American physicist David Moffitt and his wife, Rebecca, outside the Artemis Club, an exclusive London casino and art gallery, propels MWA Grand Master Grimes's solid 24th mystery featuring Scotland Yard's Det. Supt. Richard Jury (after 2014's ). Jury reads about the crime in the newspaper the next day. Meanwhile, a gritty version of the Baker Street Irregulars, children who hang out at train stations and Heathrow and act as informants, have the shooter in their sights; 10-year-old Patty Haigh befriends the killer and accompanies him to Nairobi, Kenya, where Melrose Plant, one of Jury's team, soon follows. Jury's investigation centers on gem smuggling, tax dodging, and greed. The real mystery is how to find a cab drivers' pub, the Knowledge, so secret that even Scotland Yard can't force its patrons to reveal its location. Though the plot gets a bit muddled midway through, readers will appreciate the elements that have made this a long-running bestselling series, notably a complicated case and distinctive characters.