On writing : a memoir of the craft / by Stephen King. 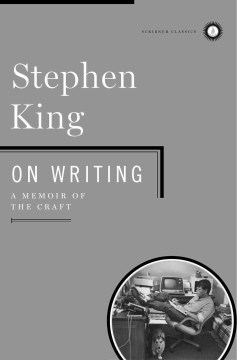 King could write a phone book and make it not only a best-seller but also gripping reading. So expect his fiction-writing how-to to be a megahit that reaches plenty of readers besides wanna-be novelists. It is riveting, thanks to King's customary flair for the vernacular and conversational tone, and to the fact that he flanks his advice with two memoirs, the latter recalling his near-fatal 1999 stint as the victim of a bad driver. The first memoir, "C.V.," concentrates on his life as a writer, which began in childhood. It took some time to publish for money, but ever since Carrie garnered $400,000 for paperback rights, he has been the Stephen King. He loves to write, though he emphasizes it is far more work than play. Loving it is essential, though, and having a good "toolbox," full of vocabulary, grammar, and the usage and mechanics prescribed by Strunk and White's perdurable Elements of Style, is next most important. It is invaluable to read a lot, and the key to novel writing is following the story--not a plot that can be charted or outlined, but the developments natural for the characters, given the situation they are in. For himself, King says, good health and a good marriage have been crucial, never more so than during his recovery from the accident. Good advice and a good, ordinary life, relayed in spunky, vivid prose, are the prime ingredients of what must be considered not at all the usual writer's guide. ((Reviewed July 2000)) Copyright 2000 Booklist Reviews

In 1981 King penned Danse Macabre, a thoughtful analysis of the horror genre. Now he is treating his vast readership to another glimpse into the intellect that spawns his astoundingly imaginative works. This volume, slim by King standards, manages to cover his life from early childhood through the aftermath of the 1999 accident that nearly killed him. Along the way, King touts the writing philosophies of William Strunk and Ernest Hemingway, advocates a healthy appetite for reading, expounds upon the subject of grammar, critiques a number of popular writers, and offers the reader a chance to try out his theories. But most important, we who climb aboard for this ride with the master spend a few pleasant hours under the impression that we know what itís like to think like Stephen King. Recommended for anyone who wants to write and everyone who loves to read. [Previewed in Prepub Alert, LJ 6/1/00.]óNancy McNicol, Hagaman Memorial Lib., East Haven, CT Copyright 2000 Cahners Business Information.

This book really is a blend of memoir (the author discusses his childhood and adolescence) and craft (there's a discussion of the tools of the trade as well). And why not take your writing lessons from a King? Copyright 2000 Cahners Business Information.

Entertaining and structured to please, this guide contains much about King as well as his writing wisdom. The author describes how the writing life can coexist with the everyday. (LJ 7/00)

"No one ever asks [popular novelists] about the language," Amy Tan once opined to King. Here's the uber-popular novelist's response to that unasked question a three-part book whose parts don't hang together much better than those of the Frankenstein monster, but which, like the monster, exerts a potent fascination and embodies important lessons and truths. The book divides into memoir, writing class, memoir. Many readers will turn immediately to the final part, which deals with King's accident last year and its aftermath. This material is tightly controlled, as good and as true as anything King has written, an astonishing blend of anger, awe and black humor. Of Bryan Smith (who drove the van that crushed King) watching the horribly wounded writer, King writes, "Like his face, his voice is cheery, only mildly interested. He could be watching all this on TV...." King's fight for life, and then for the writing life, rivets attention and inflames admiration as does the love he expresses throughout for his wife, novelist Tabitha. The earlier section of memoir, which covers in episodic fashion the formation of King the Writer, is equally absorbing. Of particular note are a youthful encounter with a babysitter that armchair psychologists will seize upon to explain King's penchant for horror, and King's experiences as a sports reporter for the Lisbon, Maine, Weekly Express, where he learned and here passes on critical advice about writing tight. King's writing class 101, which occupies the chewy center of the book, provides valuable advice to novice scribes although other than King's voice, idiosyncratic and flush with authority, much of what's here can be found in scores of other writing manuals. What's notable is what isn't here: King's express aim is to avoid "bullshit," and he manages to pare what the aspiring writer needs to know from idea to execution to sale to a few simple considerations and rules. For illustration, he draws upon his own work and that of others to show what's good prose and what's not, naming names (good dialogue: Elmore Leonard; bad dialogue: John Katzenbach). He offers some exercises as well. The real importance of this congenial, ramshackle book, however, lies neither in its autobiography nor in its pedagogy, but in its triumphant vindication of the popular writer, including the genre author, as a writer. King refuses to draw, and makes a strong case for the abolition of, the usual critical lines between Carver and Chandler, Greene and Grisham, DeLillo and Dickens. Given the intelligence and common sense of his approach, perhaps his books' many readers will join him in that refusal. 500,000 first printing. (Oct.) Copyright 2000 Cahners Business Information.

The thorn necklace: healing through writing and the creative processBlock, Francesca Lia

Bird by bird: some instructions on writing and lifeLamott, Anne

The art of memoirKarr, Mary

Where the past begins: a writer's memoirTan, Amy

Consider this: moments in my writing life after which everything was differentPalahniuk, Chuck

How to write an autobiographical novel: essaysChee, Alexander

Still writing: the pleasures and perils of a creative lifeShapiro, Dani

Mockingbird: a portrait of Harper Lee : from Scout to Go set a watchmanShields, Charles J., 1951-