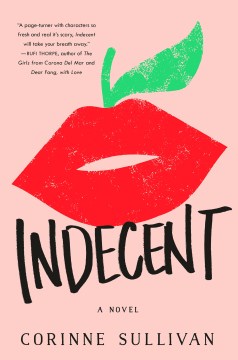 Fresh out of Buffalo State University, mousy education major Imogene Abney snags an apprenticeship at the prestigious Vandenberg School for Boys. Since childhood, Imogene fantasized about an ivy-covered education. Vandenberg is everything her public schools were not and then some. Sometime during her first few months at the elite boarding school, between grading history exams, making dormitory rounds, and assistant coaching lacrosse, Imogene catches the eye of fourth-year heartthrob, Adam "Kip" Kipling. Confident, outgoing, and hairy, Kip is everything Imogene is not, and as is the way of student-teacher affairs, theirs is immediately intense. Imogene isolates herself from family and friends, running nightly to Kip's dorm room, where her sexual naïveté and overall say-no-to-life attitude become irrelevant between the sheets of Kip's Twin XL. In true illicit-boarding-school-romance fashion, things are hot and heavy—until Kip starts to pull away following the fall formal. Innocent Imogene is dumbfounded, but readers will not be. Kip's sense of entitlement and immaturity were present from the start. Sullivan's debut is a smart and delicious page-turner. Copyright 2018 Booklist Reviews.

Imogene Abney is in her first year as a teacher's apprentice at the Vandenberg School for Boys. Twenty-two years old, introverted, and inexperienced with boys, Imogene encounters the popular, handsome student Adam Kipling, "Kip," out after hours with his friends. She is instantly drawn to his good looks, charm, and social status. She falls hard for Adam, coming over whenever he texts her, any fear of being caught the last thing on her mind. They quickly begin an illicit affair with consequences that are more than dangerous. Sullivan pens a steamy debut, in which infatuation crosses the line into obsession as Imogene falls deeper and more in love with Adam. While she knows that he is not in love with her, she can't help but fall into his trap, with the torrid sex and his sweet words stroking her ego. While this novel doesn't reinvent the wheel as far as the subject matter, Imogene's backstory adds a layer to the story that will have readers sympathizing with her as she works through her past. A good read for those who enjoy boarding school-based novels, including Jessica Anya Blau's The Trouble with Lexie, and Amy Poeppel's Small Admissions.—Erin Holt, Williamson Cty. P.L., Franklin, TN

In Sullivan's tense and surprising debut, recent college graduate Imogene Abney begins a yearlong teaching apprenticeship at the elite Vandenberg School for Boys in Scarsdale, N.Y., a place "steeped in honor, tradition, and many, many rules." She is enamored of the school, exactly the kind of place she herself would have wanted to attend, had she been rich and male, and she quickly becomes obsessed with one of its students, Kip, who embodies all she is not. Their affair escalates quickly, based almost entirely on his cocky surety and Imogene's many, visible insecurities (she picks the skin on her face until it bleeds, and sometimes goes days without leaving bed, eating, or showering). Sullivan's novel is at its best in its brief glimpses of the past, demonstrating what Imogene sees as her successes and failures in high school and college—these passages give the reader insight into what Imogene could possibly be searching for in her job-risking relationship, showing the depth of her confused standards and instincts for self-destruction. Less compelling is the affair itself. It's far from discreet, and the constant threat of exposure that looms throughout—whether by a fellow apprentice or Kip's wide circle of friends—feels low-stakes compared to Imogene's rich, contradictory, and devastating interior life. Nevertheless, this is an affecting novel, examining self-doubt, self-sabotage, and the lasting impact of both.

My year of rest and relaxationMoshfegh, Ottessa