American by day / Derek B. Miller. 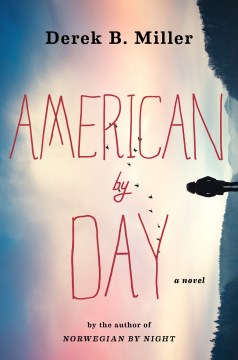 *Starred Review* The plot starts out simply enough. Oslo Chief Inspector Sigrid Ødegård, exonerated after killing a man in a hostage-taking incident, takes time off to visit her widowed father. But her father has other plans for her and sends Sigrid to America to find her missing older brother, Marcus, whose last letter to his father was disturbing. In upstate New York, where Marcus is an adjunct professor, Sigrid encounters Sheriff Irving Wylie, an unlikely lawman with an MA in divinity studies, and learns that Marcus is a suspect in the death of his lover, African American professor Lydia Jones, who was bereft after her 12-year-old nephew was shot and killed by a white cop, who was later cleared of all charges. What lifts this well above average are the characters, notably Sigrid and Irv, and their relationship and discussions, ranging from the investigative process to the characteristics of their respective countries, as they determine to what extent they can work together to achieve their desired goals. Miller (Norwegian by Night, 2013) offers a slightly different spin on Scandinavia-set crime fiction, wrappinga thriller plot around the character-driven substance of literary fiction to produce a hybrid that is compelling from any angle. Copyright 2018 Booklist Reviews.

In , Norwegian police chief inspector Sigrid Ødegård shoots a man while protecting herself from a perceived attack. He dies in her arms, a moment she's never been able to get past. If he'd only understood her warnings—he didn't speak Norwegian—would she have reacted so quickly? Now Sigrid is in America, looking for her estranged brother: he's missing after the suspicious death of the woman he loved, a professor of African American studies. Miller's latest novel is about redemption, both Sigrid's and her brother's. It's also about differences, how being young and black in America paints a target on your back and how difficult it is to get beyond color here even if one is trying to. Lastly, it's a novel about detection: Sigrid is a solid sleuth but so is the sheriff in upstate New York, whose contrarian ways irritate but also attract her. If Tocqueville had written a police thriller, it might look something like this engrossing and wryly humorous but also deeply serious work. For fans of Miller and his previous works (e.g., ), which were deservedly acclaimed. [See Prepub Alert, 10/22/17.]

In the summer of 2008, 40-ish Chief Insp. Sigrid Ødegård, the heroine of this outstanding crime novel from Miller (), travels from Oslo to upstate New York to look for her missing brother, Marcus. Marcus is the prime suspect in the murder of his African-American lover, Syracuse State University professor Lydia Jones, who was thrown out of the window of a building that Marcus was seen entering shortly before. Damning evidence includes traces of skin under Lydia's fingernails that match Marcus's DNA. A specialist in race relations, Lydia was tormented by the recent death of her nephew, shot by a white policeman. Sigrid soon joins forces with Sheriff Irving Wylie, a former biblical scholar with a deceptively aw-shucks manner. Wylie is quick to rebut her laconic Norse insights on such matters as American individualism and police methodology. Leavened throughout with Miller's wry reflections on Norway's "chronic sense of discontentment," this incandescent exposé of European and American mores profoundly entertains and provokes disturbing questions about personal and societal values.

A place in the windChazin, Suzanne