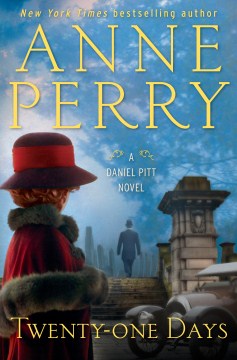 The maven of well-crafted Victorian mysteries and author of both the William Monk series and the Charlotte and Thomas Pitt mysteries introduces the Pitts' son, Daniel, junior barrister, in this intriguing, entertaining, and character-centric start to a new series. Just when he's making progress on a case in which he hopes to save his father's colleague from hanging, Daniel is ordered to assist on another case in which the defendant, Russell Graves, seems clearly guilty of his wife's brutal murder. Graves is a condescending, abusive man who refuses to defend or explain himself, presenting multiple challenges for his legal team. In a story that's nicely tied to the characters in the Pitt series, Perry introduces Daniel and his cohort, the brilliant Miriam Fforde Croft, and raises the knotty question of whether some clients are truly undefendable. A similar case is at the heart of Sarah Schmidt's See What I Have Done (2017), the story of the Borden ax murders. Readers interested in the legal and philosophical questions Perry raises will also enjoy William Landay's Defending Jacob (2012). Copyright 2018 Booklist Reviews.

After 32 adventures, Perry decided that the series starring Det. Thomas Pitt and unimpeachably smart wife Charlotte had run its course and is launching a new series starring their lawyer son, Daniel. Daniel's client, biographer Russell Graves, appears to have been framed for the murder of his wife, and Daniel has 21 days to find the real killer before Graves hangs.

Daniel Pitt, son of the legendary Thomas and Charlotte Pitt, is a young barrister determined to save his client from execution. Biographer Russell Graves was convicted of killing his wife and setting her body on fire. Daniel and his colleague Kitteridge have 21 days to find evidence to overturn the conviction or Russell hangs. While Kitteridge looks for legal loopholes, Daniel investigates other suspects. Set ten years after , Perry's excellent new series launch expertly takes the Pitts into a new century and makes use of the scientific advancements of the time, fingerprints and X-rays, to add fresh drama to the courtroom scenes. Daniel, having been so lovingly raised, is unused to the more complicated side of the law and life. Consequently, he comes across as a little naive. This innocence is mostly endearing, and he is surrounded by an exciting cast of hopefully recurring characters. Fans of Perry's long-running "Thomas Pitt" series will delight in following the adventures of a new generation. [See Prepub Alert, 10/16/17.]

Set in 1910, bestseller Perry's series kickoff introducing attorney Daniel Pitt fails to impress, in part because Daniel, the son of the stars of the author's Thomas and Charlotte Pitt series (, etc.), is a much less developed character than his parents. After managing to gain an acquittal for a client charged with murder, the inexperienced Daniel aids in the defense of historian Russell Graves, who's on trial at London's Old Bailey for murdering his wife, Ebony. Even though Ebony's face and upper body were "burned to the point of total disfigurement," their 19-year-old daughter, Sarah, was able to identify the body. When Graves is convicted, Daniel has 21 days to find exculpatory evidence before the man's execution. In his search, he encounters a serious moral dilemma. The puzzle's uninspired solution won't shake the faith of Perry fans. They know that she's quite capable of doing better.