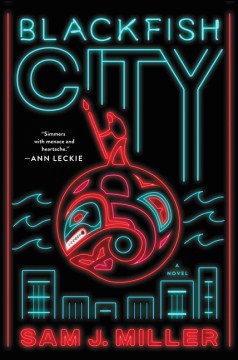 In the future, a massive floating city in the Arctic, home to a million people, is slowly decaying. Corruption and crime, not to mention a frightening new plague, are destroying the city's self-contained civilization. Then a mysterious woman arrives from the sea and inspires a handful of disparate people to join together to fight for the survival of their home. This has the look and feel of science fiction, but the novel tells a timeless story of rebellion againsta corrupt master, giving it a kind of Hunger Games resonance that reaches beyond any genre boundaries. Miller is a graceful writer, easing us into the story gently, letting us get acclimated to its time and place, before subtly speeding up the pace and plunging us into the characters' race for survival. And what fine characters they are: people of the future, yes, but with all the texture and believability of ordinary folk. Copyright 2018 Booklist Reviews.

Shirley Jackson Award winner Miller, who recently showed up with the multi-starred YA novel , goes dystopian in his first adult foray. Climate wars compel the construction of a floating city in the Arctic Circle that's starting to face some troubles. Then a woman arrives on an orca and foments political resistance. With a 40,000-copy first printing.

In the aftermath of climate change, refugees from flooded and destroyed cities crowd into Qaanaaq, a floating metropolis constructed north of Iceland. They bring with them the same fears, flaws, grasping desires, and hopes they'd held prior to the collapse. The once powerful and wealthy continue to exert their influence—setting groups against one another to deflect the anger and discontent that arises. The nanobonded, victims of experimentation, who can connect with animals by virtue of their enhanced blood, are particularly hated and ostracized. Atrocities are committed, families are torn apart. Meanwhile, "the breaks," a potentially viral memory disease, infects much of the population. Into this backdrop an enigmatic woman accompanied by a polar bear, and pulled on a raft by an orca, arrives—willing to do whatever it takes to find and reunite her people. This new offering from the author of the YA novel, , explores the tenuous survival of our species in a not-so-distant or impossible future. With detailed worldbuilding, enriched through multiple characters' points of view, this fiercely exciting story should find an audience among fans of apocalyptic sf. [See Prepub Alert, 10/22/17.]

Miller, fresh from his YA debut (), makes the jump to adult SF with an ambitious, imaginative, and big-hearted dystopian ensemble story that's by turns elegiac and angry. The floating city of Qaanaaq was constructed after many mainland cities burned or sank. The arrival of a woman with two unusual companions—an orca and a polar bear—draws a disparate group together. Ankit, a political aide, wants to free her institutionalized birth mother; her brother, Kaev, is a brain-damaged fighter at the end of his career; Fill, a rich playboy, has the breaks, an illness that throws sufferers into strangers' memories; and Soq, an ambitious nonbinary street messenger, is trying to hustle their way into a better life. Together, they uncover a dramatic series of secrets, connections, and political plots. Miller has crafted a thriller that unflinchingly examines the ills of urban capitalism. Qaanaaq is a beautiful and brutal character in its own right, rendered in poetic interludes. The novel stumbles only at the very end, in a denouement that feels just a little too hurried for the characters' twisting journey.

The only harmless great thingBolander, Brooke

The wolves of winterJohnson, Tyrell