Scot free : the lighter side of the dark underbelly of the California dream / Catriona McPherson. 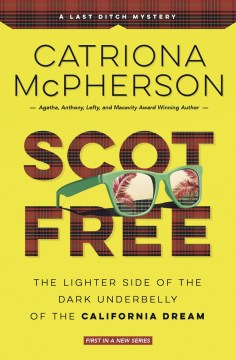 After ending her ill-conceived marriage to a philandering doctor, Lexy Campbell is all set to leave Cuento, California, for her native Scotland. She's just waiting for her marriage-counseling clients, Mr. and Mrs. Bombarro, to pop in for their last session when the police come knocking and announce that Mrs. Bombarro has been arrested for murdering Mr. Bombarro with stock from their pyrotechnics empire. Lexy is adamant that sweet Visalia Bombarro is no murderer. Plus, she's just helped the octogenarian lovebirds reconcile and knows they planned to make a fresh start in Sicily. Lexy's efforts to clear Visalia's name make for a madcap romp, as she and her insect-phobic sidekick, Todd, run up against hostile detectives, a vermin-planting vandal, and the Bombarros' niece Sparky and her hulking Russian bodyguards. McPherson, who has earned acclaim for her dark thrillers and Dandy Gilver period cozies, blends jaunty pacing, a comically rendered Southern California setting, and quirky characters in this series starter. A sure bet for fans of Janet Evanovich and Sarah Strohmeyer. Copyright 2018 Booklist Reviews.

In an impulsive moment, Lexy Campbell left her native Scotland, married her American dentist boyfriend, and started her marriage counseling practice in California. Six months later, the marriage has fallen apart, and Lexy has one more final session with her clients, the Bombaros, before she returns to Scotland. But Lexy's clients don't show. Mr. Bombaro is in the morgue, and his wife is in jail, suspected of killing him. Lexy can't let that sweet old lady take the rap, so she finds a room down the street at the Last Ditch Motel. An invasion of bugs, an influx of Mrs. Bombaro's relatives, and a suspicious cop can't keep Lexy and her new friends from the motel from investigating. The award-winning author of the historical "Dandy Gilver" mysteries launches a new contemporary series with a bang. Her character-driven romp is sparked by the larger-than-life, quirky residents of the Last Ditch Motel, putting this laugh-out-loud whodunit on a par with the early Janet Evanovich.

Homeless and broke after leaving her cheating American husband, Scottish marriage counselor Lexy Campbell finds her life in a mess, but it's a delightful mess, which aptly describes this series launch from McPherson (). Lexy intended to leave California for Edinburgh immediately after her last therapy session with Clovis and Visalia Bombaro, the octogenarian owners of the biggest fireworks company west of the Mississippi, who were calling it quits after decades together. But the police show up instead to tell Lexy that Clovis is dead, killed by a firework explosion in a most unfortunate bodily orifice, and Visalia is their prime suspect. Lexy's return home is put on hold while she tries to prove that "Mizz Vi" is innocent with the dubious help of several eccentric friends, who intruded into her life when Lexy took up temporary residence at the Lassditch Motel. Lexy's snide observations about the California lifestyle can't cover up her affection for her friends, who are as warm-hearted as they are weird. Readers will look forward to Lexy's further adventures.

To have and to kill: a wedding cake mysteryClark, Mary Jane Behrends

A dark and stormy murderBuckley, Julia, 1964-

Cremains of the daySimon, Misty