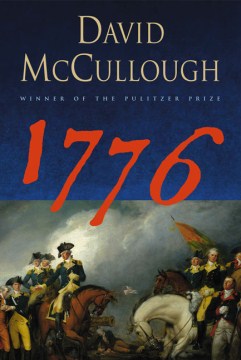 /*Starred Review*/ As the year 1776 began, hostilities between American forces and British regulars, which had begun the preceding April, continued. Yet a full-fledged war for independence was not inevitable. In Parliament, such conciliators as Edmund Burke and Charles Fox attacked government policy as needlessly provocative. In America, many members of the Continental Congress also sought compromise. But the rush of events, especially the ongoing bloodletting, soon drowned out calls for moderation. Pulitzer Prize-winning historian McCullough has provided a stirring account of the year that began with the humiliating British abandonment of Boston and ended with Washington's small but symbolically important triumph at Trenton. In between, McCullough recounts the American disaster at Brooklyn and the demoralizing retreat across New Jersey. He is a gifted writer who enriches his story with ample use of the diaries and correspondence of ordinary soldiers on both sides. Yet it is his portrayals of the two principal antagonists in this struggle that makes this account both engrossing and poignant. George Washington, as expected, is seen here as iron-willed and ambitious, but McCullough also shows him as prone to self-doubt and occasionally in despair over the string of setbacks. George III, contrary to American prejudice and propaganda, is honorable, reasonably intelligent, and sincerely outraged at the ingratitude of some of his American subjects. This is a first-rate historical account, which should appeal to both scholars and general readers. ((Reviewed March 1, 2005)) Copyright 2005 Booklist Reviews.

Drawn from primary-source materials collected at more than 25 libraries, archives, special collections, and historic sites in the United States and the United Kingdom, this excellent study from Pulitzer Prize and National Book Award winner McCullough offers fresh insights and a deeper appreciation of the Continental Army's tribulations during the disastrous year of 1776. McCullough opens with Washington's unexpected victory during the Siege of Boston and then examines the ill-conceived New York campaign and the tortured retreat across New Jersey. Through the diary entries of freezing, sick, and poorly clad soldiers, he allows the reader to experience vicariously their searing hardships. Along the way, Washington's problems with short-term enlistments, a parsimonious Congress, indiscipline, constant dread of exceeding his authority, feuding officers, price gouging by local suppliers, and Loyalist betrayals are introduced. The book's numerous thumbnail sketches are fascinating and balanced. In particular, McCullough cites as Washington's most enduring qualities his abiding realization of what was at stake and dogged perseverance to achieve independence. Ending on an optimistic note, McCullough brilliantly captures the Spirit of '76 in Washington's miraculous victories at Trenton and Princeton. An altogether marvelous contribution that deserves to be read by every American; recommended for all libraries. [See Prepub Alert, LJ 2/15/05.]-John Carver Edwards, Univ. of Georgia Libs. Copyright 2005 Reed Business Information.

McCullough's 1776 was such a hit that the publisher is giving us a new edition illustrated with intriguing primary documents, like a ledger showing how much Washington paid his spies. Copyright 2007 Reed Business Information.

Bestselling historian and two-time Pulitzer winner McCullough follows up John Adams by staying with America's founding, focusing on a year rather than an individual: a momentous 12 months in the fight for independence. How did a group of ragtag farmers defeat the world's greatest empire? As McCullough vividly shows, they did it with a great deal of suffering, determination, ingenuity-and, the author notes, luck.Although brief by McCullough's standards, this is a narrative tour de force, exhibiting all the hallmarks the author is known for: fascinating subject matter, expert research and detailed, graceful prose. Throughout, McCullough deftly captures both sides of the conflict. The British commander, Lord General Howe, perhaps not fully accepting that the rebellion could succeed, underestimated the Americans' ingenuity. In turn, the outclassed Americans used the cover of night, surprise and an abiding hunger for victory to astonishing effect. Henry Knox, for example, trekked 300 miles each way over harsh winter terrain to bring 120,000 pounds of artillery from Fort Ticonderoga to Boston, enabling the Americans, in a stealthy nighttime advance, to seize Dorchester Heights, thus winning the whole city.Luck, McCullough writes, also played into the American cause-a vicious winter storm, for example, stalled a British counterattack at Boston, and twice Washington staged improbable, daring escapes when the war could have been lost. Similarly, McCullough says, the cruel northeaster in which Washington's troops famously crossed the Delaware was both "a blessing and a curse." McCullough keenly renders the harshness of the elements, the rampant disease and the constant supply shortfalls, from gunpowder to food, that affected morale on both sides-and it certainly didn't help the British that it took six weeks to relay news to and from London. Simply put, this is history writing at its best from one of its top practitioners. Agent, Morton Janklow. 1,250,000 first printing; BOMC and History Book Club main selections; Literary Guild and QPB featured alternates; 18-city author tour. (June) Copyright 2005 Reed Business Information.

This handsome new version of McCullough's blockbuster (2.6 million copies of the original edition in print) is a visual feast. The text is abridged, but McCullough illustrates his riveting account of "the most important year in the war that made America" with maps, portraits and reproductions of broadsides and newspaper ads. Many famous paintings are included—Washington Crossing the Delaware (which, McCullough notes, captures the drama of the moment, even though many of the details are inaccurate); Charles Wilson Peale's portraits of Alexander Hamilton and Gen. Nathanael Greene; John Singleton Copley's portrait of Mercy Otis Warren, who wrote an early history of the revolution. McCullough also introduces less well-known images, such as a satiric print poking fun at the British prime minister, Lord North. Scattered throughout are vellum envelopes that hold facsimile reproductions of 37 primary sources—letters from George Washington to Martha, an ambrotype of Continental soldier Ralph Farnham as a centenarian, the text of a vow of allegiance to the king taken by Loyalists in New Jersey. By including these documents, McCullough has recreated not just the excitement of 1776, but the thrill of an archival research trip as well. From start to finish, this volume is a delight. (Oct.)