Carry on : the rise and fall of Simon Snow / Rainbow Rowell. 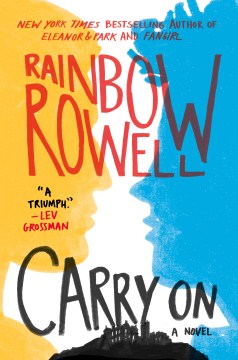 *Starred Review* It's Simon Snow's last year at the Watford School of Magicks, and it's not going as planned. His magic, always unstable, has been even more unpredictable, which is bad news with the magical world's most infamous bad guy after him. His girlfriend is distant, and he's afraid he'll lose touch with his best friend after graduation. But most unsettling of all, Simon's frustrating, evil, pretty-sure-he's-a-vampire nemesis/roommate hasn't come back to school. Baz is probably just off plotting somewhere, but what if he's really in trouble? And why does Simon care so much, anyway? Rowell's debut fantasy was first alluded to in Fangirl (2013) as a Harry Potter–like phenomenon. The similarities are, at first, easy to spot, and this does lag a bit in comparison—seven years of world-building don't easily fit into the first 150 pages. But things accelerate once Baz hits the stage, quickly taking on new life and heart. Rowell has created a story that is as much a loving critique of the "Chosen One" narrative as it is an example of the genre. The romance, once it gets going, is irresistible and surprisingly tender, but the true strength here is the characterizations: sleek, tough-talking bad-boy Baz; beautiful but reluctant Agatha; clever and exuberant Penelope; and the brilliant, unhinged Mage, who leads the school, are all paid careful attention. And at the center of it all is Simon, the Chosen One himself, made special by circumstance and, like anyone, just trying to figure out a way to keep going. Stock up on copies—this one begs to be reread.HIGH-DEMAND BACKSTORY: Simon and Baz have been garnering attention since they first appeared in Fangirl, and buzz has been building for their feature-length debut. Add in Rowell's history of critical and commercial success, and you've got yourself a hit. Copyright 2014 Booklist Reviews.

In this Fangirl companion novel, Simon Snow, the most powerful mage in centuries, uncovers secrets that call into question his beliefs about good and evil. He also realizes that his obsession with his probably-a-vampire roommate Baz may not be purely antagonistic. The novel is longer than it needs to be--just kiss already, Simon and Baz--but there's much to enjoy along the way.

In Fangirl (rev. 11/13), protagonist Cath wrote fanfiction for the fictitious "Simon Snow" fantasy series. Now Rowell has written a novel set in Simon Snow's universe and using many conventions of fanfiction, most notably "slash" (in this case non-graphic), usually defined as a wish-fulfilling relationship between two characters of the same sex who, in the original work, are not a romantic couple. Simon, the most powerful mage in centuries, uncovers secrets during his final year at Watford School of Magicks that call into question his long-held beliefs about sharp lines between good and evil. He also begins to realize that his obsession with his probably-a-vampire roommate Baz may not be purely antagonistic. The novel is longer than it needs to be—just kiss already, Simon and Baz—and the many alternating narrators are a little dense when it comes to solving several related mysteries. But there's plenty to enjoy along the way, including clever names for spells ("These aren't the droids you're looking for" makes oddities like dragon parts on a human unnoticeable) and plenty of wit. Reading Fangirl first isn't strictly necessary—the brief author's note covers the basics—and the metatextual concept is somewhere on the spectrum between confusing and fascinating, depending on one's perspective. A working knowledge of the Harry Potter books and other popular fandoms isn't absolutely essential either, but it makes this send-up a lot more fun. shoshana fla Copyright 2014 Horn Book Magazine.

A hero at the end of the worldClaiborne, Erin

The gentleman's guide to vice and virtueLee, Mackenzi

The red scrolls of magicClare, Cassandra