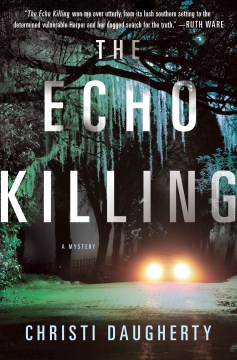 Journalist Harper McClain has her hands full trying to make it at a Savannah newspaper that always risks being scooped by the local TV news. She doesn't need the complication of reporting a murder that bears a suspicious resemblance to her mother's killing 15 years before, especially since she's still putting her life together after finding her mother's body. Over the years, the police officer who helped Harper after her mother's death became a champion and a confidant, and he and her boss at the paper are incensed when she continues to investigate the new crime after she has been ordered to drop it. Every mystery reader knows there's no investigator like one who's been ordered off the case, but the clichés end there as Daugherty offers in-depth characterization, realistic dialogue, and a feisty romance subplot in a story that will absorb procedural aficionados until its surprising ending. Copyright 2018 Booklist Reviews.

Former crime reporter Daugherty, who writes the YA thriller series "Night School" under the name CJ Daugherty, turns out her first adult novel. Heroine Harper McClain is also a crime reporter, driven to cover the dark underbelly of beautiful Savannah by her mother's unsolved murder when Harper was 12. Now she's investigating a murder that looks uncannily like her mother's—a woman has been stabbed multiple times and left naked in her kitchen, with no trace of evidence—and Harper is determined to find the killer.

Fifteen years ago 12-year-old Harper McClain found her mother's bloody body in their kitchen. The murder was never solved but it left an imprint on every aspect of Harper's life, even her choice of career as a crime reporter in Savannah, GA. Now her reporting takes her to another all-too-familiar crime scene of a woman's bloodied body discovered by her traumatized 12-year-old daughter. It brings back memories Harper has tried to forget, and even though the cops insist it's not the same killer, her gut feelings tell her she needs to investigate on her own. With an exact attention to detail and dialog, Daugherty sets her sinister murder stage and introduces her complex players. Harper's nonapologetic tenacious curiosity draws readers into the plot and will leave them hungry for her next big story. The author of the best-selling YA "Night School" series marks her adult fiction debut with a spine-tingling, gritty mystery. Fans of Hank Phillippi Ryan and Michael Connelly will thoroughly enjoy this new voice in crime fiction.

Newspaper reporter Harper McClain, the narrator of YA author Daugherty's uneven adult debut, peers through a window at a crime scene on a quiet Savannah, Ga., street and spies single mother Marie Whitney lying naked on her kitchen floor, covered in stab wounds. The tableau is identical to what Harper saw 15 years earlier, when she came home from school to find her own mother dead. The police claim that it's unlikely the same person committed both murders, but Harper remains convinced. As the Whitney case starts to cool, Harper becomes increasingly desperate and reckless, breaking rules, burning bridges, and endangering her own life in an attempt to link the two women and catch their killer. What begins as an overwritten, overwrought crime novel with a laughably hard-bitten protagonist relaxes into an engrossing, multifaceted mystery with snappy dialogue, a well-drawn cast of characters, and a sizzling romantic subplot. The book ends with a clever plot twist that paves the way for a sequel. Readers will eagerly await Harper's further adventures.