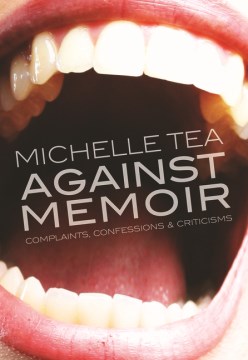 *Starred Review* Reading the first of Tea's (How to Grow Up, 2015) fine essays feels like opening a bag of chips: you know it's impossible to eat just one. Tea's irresistible essays are arranged under "Art & Music," "Love & Queerness," and "Writing & Life." Her beautifully crafted, if painful, look at the infamous Valerie Solanas, who shot Andy Warhol and wrote the 1967 SCUM Manifesto, sets the book's complex tone as Tea recounts her own abusive family trauma and praises similarly mistreated Solanas' humor, noting that her world was "patently absurd, a cosmic joke," and that her radicalism enabled Tea to live among "would-be-Valeries." In a "husband-wife" essay, Tea maximizes her own bittersweet humor about the bewilderment surrounding same-sex relationships that leads to pronoun confusion, as when Tea writes about marrying and honoring "my person," her masculine-appearing female partner. In the titular piece, Tea declares that she "hates the nostalgia" for her teens that brings her to tears at night but embraces the fact that "memory is the story line" of life, while memoir "picks up the essence of the moment." Tea proves that words can heal. An essential work, especially for LGBT collections. Copyright 2018 Booklist Reviews.

Author and poet Tea () covers the gamut of her experience in this unputdownable antimemoir, which consists of previously published articles, talks, essays, and reviews but mostly recollections of her experience as a queer activist. Valerie Solanas and Andy Warhol make star appearances at the start, but the book's core is devoted to an array of topics on queerness, transgender rights, childbirth, and romantic relationships of many types. Tea demonstrates admirable honesty on various subjects. The standout essay "How Not To Be a Queer Douchebag" is a prime example. Readers unfamiliar with the author should be advised that she is often explicit in her descriptions of sex, but they will likely understand her tone and not find the writings to be purposely offensive. These charming essays deserve a wider readership beyond the LGBTQIA community, and since Tea is already well-known in those circles, it can be hoped that this will expand her audience.

Tea () takes readers on a raucous tour through American counterculture, instructing readers in what it means, and has meant, to be a queer feminist in the United States. The essay collection pulses with frequently dark and often hilarious anecdotes from Tea's life, such as the difficulties of maintaining her punk-goth style of whiteface and mohawks. Her voice and message are brightest in her less personal essays, such as "Hags in Your Face," about a gang of punk rock lesbians­ (many of whom would transition to male later in life) who roamed in packs in San Francisco's Mission neighborhood in the 1990s. In "Summer of Lost Jobs," Tea tactfully weaves tales of her teenage angst, alcoholism, and an encounter with Joey Ramone into an essay about the summer she was 16 and obsessed with fitting into the goth scene. Tea's prose is conversational, whether writing about her stint traveling the country as part of a lesbian spoken-word collective or delving into complex topics such as the harassment of young women as a product of misogynist culture. Queer counterculture beats loud and proud in Tea's stellar collection.

Kathy Acker: the last interview and other conversationsAcker, Kathy, 1948-1997

I might regret this: essays, drawings, vulnerabilities, and other stuffJacobson, Abbi

Trans like me: conversations for all of usLester, C. N.

Unbound: transgender men and the remaking of identityStein, Arlene