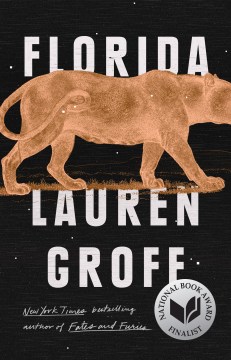 The flora and fauna of the Sunshine State vine and prowl through Groff's second short story collection and first book since the smash-hit novel Fates and Furies (2015). With sympathy for her characters and a keen sensitivity to the natural world, Groff gets readers wondering who or what will triumph or succumb. Contrary to all good advice, a woman waits out a hurricane in her historic home and is visited by the ghosts of men she's loved. A writer, the mother of two young sons, appears in several stories. In one, she's alone with the boys in a remote cabin when she falls while changing a lightbulb and then battles to remain calm and awake in a concussed delirium. In "Yport," the three spend a summer month in France for the woman's research on Guy de Maupassant, and it will be the boys who teach her something she hadn't realized about the writer she'd long studied. Though 10 of the 11 stories have been previously published, their power as a single unit is undeniable. Copyright 2018 Booklist Reviews.

A frank, rambunctious, generous writer, Groff thought big in her much-heralded novel . Here, in spot-on language, she effectively provides slice-of-life reading, capturing the scents and sounds of her newly adopted state, Florida. Her portraits aren't of sand, surf, and sunshine; instead, she shows us houses that "rot and droop" in the humidity, the "devilish reek of snakes" at swamp's edge, and an "old hunting camp shipwrecked in twenty miles of scrub" where a panther lurks. But these portraits aren't unaffectionate, and the characters can be satisfyingly tough, though Groff's alter ego in several stories is still getting her bearings. In the opening story, she walks nightly in her transitional neighborhood, seeing few people but keeping herself from becoming a yowling mom. The standout "At the Round Earth's Imagined Corners" traces a Florida boy's life from his rough upbringing, his mother's stealing him away to safety, his father's grabbing him back, and his adulthood in the family home, when he confronts the ghost of his let-down father, then joyously greets his wife. Well-observed, unexpected writing for fans and more. [See Prepub Alert, 12/11/17.]

Ferocious weather and self-destructive impulses plague the characters in this assured collection, the first from Groff () since 2009's . In "Above and Below," a grad student loses her university funding and spirals into homelessness. The solo vacationer in "Salvador"—one of three stories set outside Florida—waits out a raging storm with a menacing shopkeeper who, after the harrowing night, "smelled of wet denim and sweated-out alcohol and sour private skin." Groff's descriptions shimmer with precision: in "Eyewall," at the onset of a hurricane that a hallucinating woman endures alone, "the lake goosebumped" and "the house sucked in a shuddery breath." On a family getaway to a cheerless cabin in the claustrophobic "The Midnight Zone," a woman notes "how the screens at night pulsed with the tender bellies of lizards." That story is one of five to feature an unnamed fretful mother and novelist who, in "Yport," has dragged her two young sons to France while she researches Guy de Maupassant. "Their world is so full of beauty," she says, fearing for the boys' future, "the last terrible flash of beauty before the darkness." A number of the stories hit similar tonal notes (pessimism threatens to sink a few of them), but Groff's skillful prose, self-awareness, and dark humor leaven the bleakness, making this a consistently rewarding collection.