The word is murder : a novel / Anthony Horowitz. 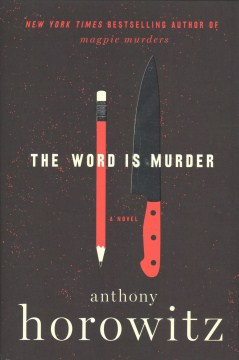 *Starred Review* Actually, the word is not murder, it's ingenious. Horowitz, who out-Christied Christie in Magpie Murders (2017), now out-Doyles Doyle by inserting himself (his actual self) into the story as the Watson-like narrator of a murder investigation he is drawn into by a brilliant and eccentric detective, Daniel Hawthorne. No one arranges her own funeral at 11 a.m. on a beautiful spring day and then gets herself murdered a mere six hours later in her own home, right? Well, Diane Cowper manages to do just that. No CCTV footage, fingerprints, or DNA traces, and no sign of a break-in, so the only clue to go on is that the victim must have opened the door to her assailant. Hawthorne has been called in as a consultant by the police and invites Horowitz to tag along because he wants the author to write a book about him. Horowitz, who started out as a television screenwriter, creating both the acclaimed Midsomer Murders and Foyle's War, finds real crime unlike anything he ever experienced while holding a cleverly devised script on a carefully designed set. Not to mention a dangerous one. A masterful meta-mystery.HIGH-DEMAND BACKSTORY: The mega-popular Horowitz has been granted the rights to continue both the Arthur Conan Doyle legacy and Ian Fleming's James Bond saga and is known to younger fans as the writer of the Alex Rider series. His star will only shine more brightly. Copyright 2018 Booklist Reviews.

The source of hit TV shows such as the BAFTA-winning and the best-selling , Horowitz offers meta-mystery that opens with a woman arranging her own funeral shortly before she's strangled to death. Famously difficult detective Daniel Hawthorne gets the case but, fortunately, he has novelist Anthony Horowitz as a partner.

In Horowitz's second stand-alone adult novel (after ), the author plays a starring role, putting a real-world twist on a first-person narrative. Daniel Hawthorne, an unlikable private detective, has been called in by the London police to help solve the murder of Diana Cowper. The mother of an up-and-coming actor, Cowper was killed on the day she arranged her own funeral. Horowitz is invited by Hawthorne to write a book about the crime and, not incidentally, split money from the book with Hawthorne. Horowitz is reluctantly intrigued with both the case and Hawthorne, a curmudgeon who reveals nothing about his personal life. A series of missteps by Horowitz annoys Hawthorne as he meticulously untangles the threads of the mystery, offending people as he goes. A classic whodunit with a metatwist, this mystery opens the door to the world of publishing, theater, and television. Fans of Dorothy Sayers and the BBC's and (both written by Horowitz) will enjoy this novel. [See Prepub Alert, 12/11/17.]

This spectacular series launch from bestseller Horowitz (), a scrupulously fair whodunit, features a fictionalized version of himself. The author's doppelgänger—who, like his creator, has written a Sherlock Holmes pastiche, , and a Tintin movie script for Steven Spielberg—is approached by Daniel Hawthorne, a former detective inspector who once consulted on one of his TV series. Hawthorne wants Horowitz to turn his "real-life" cases into books, and eventually gets him to agree. Their first joint investigative venture concerns the strangulation of Diana Cowper in her London home, mere hours after she visited a funeral parlor and made detailed arrangements for her own funeral. (In one amusing metafictional scene, Hawthorne criticizes Horowitz for inaccuracies in chapter one, an omniscient third-person account of the funeral home visit.) An interrupted text Diana sent to her son shortly before her death leads the duo to look into a long-ago hit-and-run tragedy that claimed one twin child's life and seriously injured the other. Deduction and wit are well-balanced, and fans of Peter Lovesey and other modern channelers of the spirit of the golden age of detection will clamor for more.

The truth about the Harry Quebert affairDicker, Joel, 1985-

The map of timePalma, Felix J.

A murder of magpiesFlanders, Judith