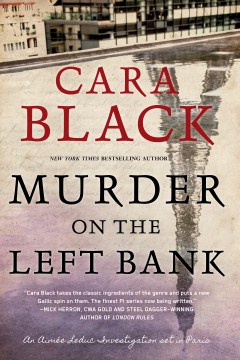 The unanswered questions that haunt Parisian PI Aimée Leduc's life—the circumstances behind her father's murder and her mother's disappearance—keep resurfacing, little bits of the puzzle slotting into place while the full picture remains incomplete. So it is again in this eighteenth entry in Black's beloved series, as Aimée is persuaded by a lawyer to hunt for a missing notebook given to him by a dying client. The notebook, Aimée learns, contains records of how a notorious syndicate of dirty cops laundered money. Finding the notebook might be a mixed blessing for Aimée: her father's name may appear in it as one of the dirty cops on the take, but it could also lead Aimée to his killers. As usual in this series, Aimée's search for answers prompts a helter-skelter, against-the-clock tour of the city's streets, this time mainly in the thirteenth arrondissement, where the trail leads her both to the district's Vietnamese neighborhood and to the remnants of the once-flourishing tapestry industry, both providing tantalizing subplots. For longtime Aimée fans—and are there any other kind, really?—this episode is particularly poignant, both for the backstory it reveals and what it suggests about the future. Copyright 2018 Booklist Reviews.

When lawyer Éric Besson receives a notebook detailing the laundering of dirty money for dirty cops, Besson sends it straight to the authorities via his assistant/nephew. But the nephew is murdered and the notebook stolen, so Besson turns to Paris's coolest PI, Aimée Leduc. Shatteringly, the cops listed in the book murdered Aimée's father. Love that Aimée!

Next in Black's always entertaining "Aimée Leduc" series (after ), this well-crafted mystery is set on Paris's Left Bank, though not the chic environs of the fifth through seventh arrondissements; one of Black's strengths is showing us the grittier, everyday Paris. When 13th-arrondissement lawyer Éric Besson receives a notebook from elderly accountant Léo Solomon detailing how he laundered dirty money for dirty cops, Besson quickly sends it to the authorities via his assistant/nephew Marcus. But Marcus has been murdered, the notebook has vanished, and for help Besson turns to Aimée, best friend of his second cousin. Though she's doing computer security work for the Bibliothèque François-Mitter and is warned by an especially huffy partner René to stay away from criminal cases, Aimée must investigate; Éric says that her father, a victim of police corruption, is mentioned in the book. Aimée leapfrogs from Paris's Cambodian neighborhood, where Marcus's girlfriend lives, to La Manufacture des Gobelins, where Léo worked and tapestries are still made in the medieval fashion. Her efforts put daughter Chloe in danger, upping the tension, and the surprise ending is especially satisfying. Another great Aimée Leduc work; for all mystery fans. [See Prepub Alert, 12/8/17.]

In bestseller Black's fast-paced 18th Aimée Leduc investigation (after 2017's ), Léo Solomon, an elderly retired accountant in poor health, insists that lawyer Éric Besson, whose late mother was a friend of Léo's, deliver a notebook containing his handwritten confession and evidence of decades of police corruption to Paris's chief prosecuting attorney. Éric asks his 18-year-old nephew, Marcus, to act as courier, but Marcus never reaches his destination. When the boy's body turns up on the street two days later, the police rule the death a drug-related homicide. Éric asks his friend Aimée to investigate. Aimée, a new mother, reluctantly takes on the case only when she discovers that her late father is implicated by information in the now-missing notebook. When the killer threatens her daughter, Aimée is forced to accept help from the source she trusts least: her family. Once again Black combines a twist-filled mystery with a convincing look at the culture and politics of the City of Lights.