A taste for vengeance : a Bruno, chief of police novel / Martin Walker. 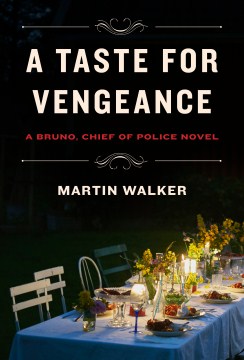 *Starred Review* Setting and cuisine far outshine plot in Walker's to-die-for atmospheric mysteries set in the Dordogne region of France. Some of the novels in this series are subtitled Mysteries of the French Countryside, more fitting than the Bruno, Chief of Police Novel used for others. In each, Walker's descriptions of the region's caves (and the new Lascaux cave re-creation), vineyards, farmhouses, gardens, and châteaus, along with his sensually detailed accounts of lovingly created meals paired with the region's wines, take center stage. Readers should come for the atmosphere, with the action serving as appetizer. And Bruno Courrèges, the police chief of St. Denis (and now the Vézère Valley), is wonderful to watch as he makes his daily rounds of horseback riding, dining out with friends in villages, and cooking. (At one point here, Bruno meets police colleagues for a working picnic on the grounds of a château.) This time, a British woman, late for a cooking vacation hosted by one of Bruno's ex-lovers, turns up dead in a picturesque farmhouse, her traveling companion found hanged in a tree outside. Police conjectures expand from murder-suicide to double murder and a plot involving intelligence and scandal. Fans of the late Robert B. Parker's Spenser series (where love of cooking infused each mystery) will find a new home with the gourmand Bruno. Copyright 2018 Booklist Reviews.

In his 11th outing (after ), Benoit "Bruno" Courreges has just been promoted to chief of police for his region in southwestern France and must supervise two new colleagues, Juliette and Louis, as well as learn the scope of his new position. At the same time, he is asked to help locate a client who has failed to turn up for a friend's cooking school course. Soon it is discovered that the missing British woman is a victim of what appears to be a murder-suicide. However the investigation takes a twist when it becomes a double homicide and the second victim was a former soldier living under a false name. Bruno gets caught up in a complex case reaching back decades to the Troubles in Northern Ireland. Reoccurring series characters add depth to the story and draw readers into the small, countryside community of St. Denis. Vivid descriptions of the Perigord region and French cooking are an added treat for Francophiles. Recommended for fans of the series as well as readers of Donna Leon, Louise Penny, and anyone who enjoys cozy mysteries set in foreign locales. [See Prepub Alert, 12/11/17.]

Bruno Courrèges, the police chief of the Dordogne village of St. Denis, goes looking for English tourist Monika Felder after she fails to show up for a cooking class in Walker's entertaining 11th series mystery (after 2017's ). Bruno learns that Monika, who left her husband back in England, was traveling with Patrick McBride, an Irishman with a house in the area. Monika turns up at the house, fatally stabbed in the bathroom; McBride's body is found hanging from a tree in the nearby woods. What at first appears to be a murder-suicide proves to be a double homicide involving more than one killer and with links to a multimillion-dollar theft in Iraq and the Troubles in Northern Ireland. The efficient Bruno also manages to help one of the women's rugby players he's coached since childhood sort out some serious problems, run through some favorite Dordogne recipes while teaching a cooking class, and continue his on-again, off-again romance with a former colleague. Walker's formula for regional crime fiction still appeals, though this outing's global elements are something of a stretch. Agent: Stephanie Cabot, Felicity Bryan Associates. (June)

Jacquot and the watermanO'Brien, Martin, 1951-