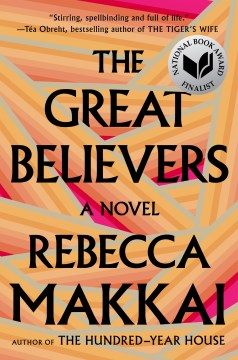 *Starred Review* In Makkai's (Music for Wartime, 2015) ambitious third novel, it's 1985, and Yale has just lost his friend Nico to AIDS: not the first friend he's lost, not nearly the last he'll lose to the terrifying, still-mysterious disease. Soon after, Nico's younger sister and Yale's friend, Fiona, connects Yale to her nonagenarian great-aunt, who studied art in Paris in the 1910s and now wants to donate her personal collection of never-before-seen work by now-famous artists to the Northwestern University art gallery, where Yale works in development. This potentially career-making discovery arrives along with a crushing reveal in Yale's personal life. Another thread throughout the novel begins in 2015 as Fiona flies to Paris, where she has reason to believe her long-estranged adult daughter now lives. With its broad time span and bedrock of ferocious, loving friendships, this might remind readers of Hanya Yanagihara's A Little Life (2015), though it is, overall, far brighter than that novel. As her intimately portrayed characters wrestle with painful pasts and fight to love one another and find joy in the present in spite of what is to come, Makkai carefully reconstructs 1980s Chicago, WWI-era and present-day Paris, and scenes of the early days of the AIDS epidemic. A tribute to the enduring forces of love and art, over everything. Copyright 2018 Booklist Reviews.

Makkai () swings between 1980s Chicago, where art gallery employee Yale Tishman has lost friend Nico to AIDS, and Paris, with Nico's younger sister Fiona seeking her estranged daughter while contemplating how the virus damaged her family.

In mid-1980s Chicago, Yale Tishman's career in the art world is on an upswing just as the AIDS epidemic begins to decimate his circle of friends and acquaintances. Friend Nico is one of the first to be taken, and his funeral brings together Yale, partner Charlie, photographer Richard, aspiring actor Julian, Nico's sister, Fiona, and various other friends and acquaintances. Skip to 2015, and Fiona is staying with Richard in Paris, seeking to reconnect with her daughter, Claire, from whom she's been estranged since Claire's entry into a fundamentalist cult. The narrative moves deftly between Chicago and Paris, with Yale and Fiona's stories intertwining around connections made and lost. At turns heartbreaking and hopeful, the novel brings the first years of the AIDS epidemic into very immediate view, in a manner that will seem nostalgic to some and revelatory to others. Makkai's sweeping fourth novel (after ) shows the compassion of chosen families and the tension and distance that can exist in our birth ones. This should strike a chord with the Gen Xers who came of age, and then aged, in these tumultuous years. [See Prepub Alert, 12/11/17.]

Spanning 30 years and two continents, the latest from Makkai () is a striking, emotional journey through the 1980s AIDS crisis and its residual effects on the contemporary lives of survivors. In 1985 Chicago, 30-something Yale Tishman, a development director at a fledgling Northwestern University art gallery, works tirelessly to acquire a set of 1920s paintings that would put his workplace on the map. He watches his close-knit circle of friends die from AIDS, and once he learns that his longtime partner, Charlie, has tested positive after having an affair, Yale goes into a tailspin, worried he may also test positive for the virus. Meanwhile, in 2015, Fiona Marcus, the sister of one of Yale's closest friends and mother hen of the 1980s group, travels to Paris in an attempt to reconnect with her adult daughter, Claire, who vanished into a cult years earlier. Staying with famed photographer Richard Campo, another member of the old Chicago gang, while searching, Fiona revisits her past and is forced to face memories long compartmentalized. As the two narratives intertwine, Makkai creates a powerful, unforgettable meditation, not on death, but rather on the power and gift of life. This novel will undoubtedly touch the hearts and minds of readers.

The house of impossible beautiesCassara, Joseph