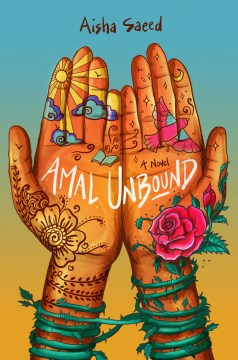 Pakistani Amal loves going to school and looks forward to becoming a teacher in the future. She only becomes aware of nuances in gender roles and the lack of opportunities afforded to girls after her father tells her that she must take care of the household while her mother recovers from childbirth. Amal hopes to continue her schooling once her mother is well, but that goal drifts further away when an accidental encounter lands her in a humongous heap of trouble. In order to spare her family from incurring further wrath and unfair consequences, Amal becomes an indentured servant to the odious Khan family. Readers will find that a little perseverance and a heart filled with hope can eventually surmount a harsh reality. Saeed fills her prose with lush descriptions of Pakistani life, while still managing to connect with readers whose surroundings and experiences will be starkly different. Hand to any reader who struggles with definitive gender roles, norms, and expectations held in place by societal structures. Grades 4-6. Copyright 2018 Booklist Reviews.

When a car grazes Pakistani girl Amal, she stands up to the rude stranger who emerges from it. The man is Jawad Sahib, son of the town's villainous landlord, who forces Amal into indentured servitude to pay back family debts. Short chapters and unadorned prose make this heartwrenching yet hopeful contemporary story accessible and direct, with Amal's emotions and strength anchoring the narrative as she uncovers the Sahibs' criminal activity. Copyright 2019 Horn Book Guide Reviews.

This heart-wrenching yet hopeful contemporary novel about class, gender, and literacy features a narrator who takes great risks in the name of justice and self-determination. Amal lives with her family in a small village in Pakistan. She dreams of becoming a teacher, but as the eldest daughter her education takes a backseat to familial responsibilities after her mother gives birth to another girl. (Following an argument with her father, Amal wonders, "If I were a son, would he so casually tell me to forget my dreams?") When Amal is grazed by a car at the market and the stranger who emerges from it is rude to her, she stands up to him, with dire consequences. The man is Jawad Sahib, the son of the town's villainous landlord. Enraged at Amal's disrespect, he demands that Amal's father pay back his debts, forcing Amal into indentured servitude. As Amal bonds with the other servants and tries to adjust to her new life, she learns more about the Sahib family's history and gains knowledge that will implicate them in a crime. When she has an opportunity to expose the truth, she takes it. Short chapters and unadorned prose make the story accessible and direct, with Amal's emotions, perspective, and strength anchoring the narrative. An author's note asserts that Amal represents real women and girls who fight injustice across the globe, often without recognition. elisa gall Copyright 2018 Horn Book Magazine Reviews.

Saeed () infuses this true-to-life story of unjust power dynamics in a poor Pakistani village with a palpable sense of dread regarding the fate of the inquisitive, industrious, poetry-loving titular character. Twelve-year-old Amal is troubled by her parents' obvious distress that her newborn sibling is yet another girl, and she is vexed that her responsibilities as eldest daughter require her to run the household while her mother is bedridden. Amal unleashes her frustration on the wrong person when she talks back to Jawad Sahib, the wealthy landowner, who demands she work off her debt for the insult . Amal's experience navigating an unfamiliar social hierarchy in the landlord's lavish estate exposes her to pervasive gender inequities and unfair labor practices, like being charged for room and board but receiving no pay. While her growing indebtedness makes it unlikely she will ever leave, Amal's ability to read grants her a dangerous opportunity to expose the landlord's extensive corruption, if she dares. Saeed's eloquent, suspenseful, eye-opening tale offers a window into the contemporary practice of indentured servitude and makes a compelling case for the power of girls' education to transform systemic injustice. Ages 10–up. Agent: Taylor Martindale Kean, Full Circle Literary. (May)

Girl of the southern seaKadarusman, Michelle, 1969-

I am Malala: how one girl stood up for education and changed the worldYousafzai, Malala, 1997-

The thing about luckKadohata, Cynthia

It ain't so awful, falafelDumas, Firoozeh