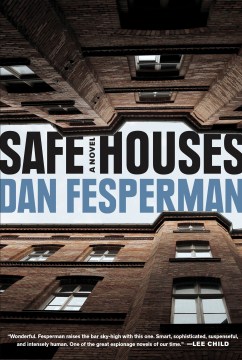 *Starred Review* In West Berlin in 1979, Helen Abell, a low-ranking CIA agent, has been relegated to what is virtually a maintenance job—cleaning up at various safe houses, changing the tapes, restocking the cabinets, etc. When making an unscheduled visit to one of the houses, she comes upon a top-level agent, Robert, attempting to rape a source. Helen intercedes, knowing there will be blowback, but she has no idea how bad it will be, nor does she know that, in a matter of days, she will be on the run from her own superiors, aided only by two other female agents who have scores to settle with Robert. Flash forward to 2014. Helen and her husband have been murdered at their Iowa farmhouse, apparently by their mentally damaged son. Their daughter, Anna, doesn't buy it and enlists Henry Mattick, an investigator with some shady government ties, to help her poke around. With all the dexterity of Kate Atkinson juggling narrative time lines in Transcription (2018), Fesperman jumps between the Cold War and the near present, filling in the tantalizing blank spaces in Helen's, Anna's, Henry's, and Robert's lives, as a mother and daughter, across time, struggle to penetrate "the cliques and factions and competing agendas, all of it beneath the big wonderful tent of the Company." The level of treachery and betrayal, personal and otherwise, depicted here is byzantine in its complexity and potential to spawn collateral damage. This is a masterfully constructed example of classic le Carré–style espionage fiction, the all-enveloping perfidy burrowing its way into inner lives and leaving the survivors only tentatively able to move forward. Copyright 2018 Booklist Reviews.

While visiting one of the CIA safe houses for which she is responsible in 1979 West Berlin, Helen Abell is disturbed to catch a conversation between two people she can't identify whose coded language suggests that something suspicious is going on. Sorting out the truth will put her up against someone powerful indeed. Fesperman has both John Creasey and Ian Fleming daggers tucked in his belt.

In 1979 West Berlin, Helen Abell works for the CIA managing safe houses. Her shrewd observation skills mark her as an agency employee who should be a field agent; in more gender-restricted 1979, she's relegated to glorified house-mothering. When Helen uncovers disturbing information about an agent, she acts, setting off a complex and dangerous chain of events with far-reaching consequences. In 2014 Maryland, a young man in between jobs lives quietly next door to a farmhouse where domestic violence suddenly strikes. Henry Mattick can't resist investigating the double homicide—a longtime farming couple murdered in their bed by their developmentally disabled son Willard. When Willard's sister Anna returns home to help Willard and try to grasp the situation, Henry agrees to assist. Their journey to the truth sends them down surprisingly dangerous paths, while Helen's narrative races toward them at a breakneck speed. Fesperman () delivers a breathtaking, intricate international spy novel unnervingly on point for the #MeToo moment. Recommended for enthusiasts of FX's looking for a fix as the show's final season draws to a close. [See Prepub Alert, 1/8/18.]

This effective thriller from Fesperman () opens in 1979 West Berlin, where Helen Abell, a low-level CIA functionary, accidentally overhears and tape records a violent encounter between a much higher ranking officer, Kevin Gilley, and a German woman. Helen intervenes, incurring Gilley's wrath; when the woman turns up dead, Helen seeks to bring Gilley to justice. In general, the resourceful Helen does the best she can to deal with the era's sexism with the help of a sisterhood of CIA women determined to make a difference. Flash forward to 2014. Helen and her husband have been murdered on their Maryland farm, and the only suspect is their mentally ill son, Willard. Believing Willard incapable of murder, daughter Anna hires PI Henry Mattick to investigate. Anna is shocked to discover that her mom was once a spy; the reader won't be surprised to learn that Mattick isn't quite what he appears to be—or that there are deep, dark secrets within the CIA. Aficionados of quality spy fiction will be rewarded.