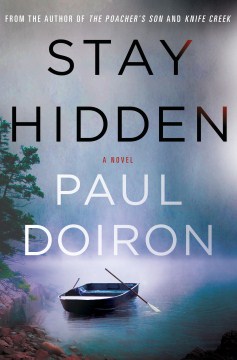 *Starred Review* Doiron brings all his considerable talent and his extensive knowledge as an outdoor guide in Maine to bear in this ninth Mike Bowditch novel (after Knife Creek, 2017). A woman has been reported shot to death on remote Maquoit Island by a deer hunter. It appears clear cut on the surface, but when Mike, newly promoted from game warden to warden investigator, arrives on the island, he's no longer sure about the case. The hunter claims he didn't fire the fatal round, and the secretive community closes ranks; furthermore, the victim was controversial author Ariel Evans, who was allegedly writing a book about resident neo-Nazis. When it turns out that Ariel is still alive, and it is her sister who is dead, public opinion turns against both Ariel and Mike. The plot is complex, and the action intense, made all the more so by forbidding terrain. The characters are well developed and clearly defined despite the dense fog that surrounds them, literally and figuratively. The extraordinary sense of place makes this Doiron's strongest novel yet. This is not Jessica Fletcher's Maine. It is a much darker place, more like C. J. Box's Wyoming. With foghorns. Copyright 2018 Booklist Reviews.

On a chilly Maine island, contentious author Ariel Evans appears to have been shot to death by a local deer hunter. But ballistic evidence proves otherwise, and then freshly minted warden investigator Mike Bowditch gets the real surprise: the victim isn't even Ariel, who walks off the ferry determined to solve the murder herself. From multi-award-nominated Doiron.

In the ninth book of Doiron's series (after ), Mike Bowditch has just been promoted to investigator in the Maine Warden Service. As the new guy, he's left behind when there is a hunting homicide in Berwick. This makes him the only warden available to work on the second incident that day, out on remote, fog-bound Maquoit Island, where a woman has been shot to death by a deer hunter. Mike is flown out to the island by his friend Charley, along with a seasoned investigator from the state police and another warden. The victim is the famous journalist Ariel Evans, who came to the island to profile Silicon Valley executive-turned-hermit Blake Markman. Suspecting this shooting was no accident and eager to prove himself, Mike pursues the recalcitrant locals through the cold fog and a huge plot twist. After a slow start, Doiron's mystery picks up steam and provides a thrilling read. For fans of the series and other outdoor lawmen mysteries. [See Prepub Alert, 1/8/18.]

The shooting of investigative journalist Ariel Evans on Maine's Maquoit Island drives Doiron's outstanding ninth novel featuring game warden Mike Bowditch (after 2017's ). Ariel apparently took a house on the island as part of her preparation for her next book—a reexamination of the 20-year-old case of Blake Markman, a Hollywood producer who was suspected of intentionally setting fire to his home with his wife inside, but who evaded criminal charges and now lives alone on a small island near Maquoit. Though the initial police report is that the victim, who was hanging up some laundry to dry, was mistaken for a deer by hunter Kenneth Crowley, who confessed to pulling the trigger in error, Mike later learns that Crowley only found the body and never confessed to anything. That the dead woman was having an affair with one of the locals provides a possible murder motive, but the case takes a bizarre turn when a woman turns up claiming to be Ariel. Doiron balances nuanced characterizations and intelligent plotting perfectly.