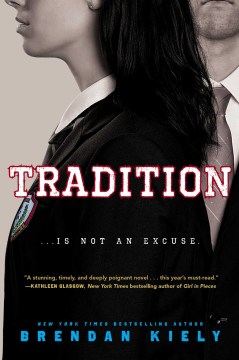 Meet two teens who become friends at a misogynistic, patriarchal private school, even as they are both drowning in secrets. Jamie Baxter, a football-player-turned-hockey-player, needs to keep it together for one last year or else miss his last shot at a scholarship. Meanwhile, Jules Devereux is trying to be a bold feminist in a school where girls are told to "not make a scene." Their secrets spill out when a teen party goes horribly wrong, and Jamie has to decide if he will support Jules in her time of need, thereby breaking a long-standing tradition of silence. Kiely bravely explores rape culture and how it intersects with class and privilege, along the way making his characters speak to those in privileged positions "in a language they cannot ignore." Kiely, coauthor with Jason Reynolds of All American Boys (2015), takes on an important, sensitive topic that should help connect readers to burgeoning social-justice movements; readers will find themselves rooting for the world not as it is, but as it might yet be. Grades 9-12. Copyright 2018 Booklist Reviews.

In this dark and timely novel, two teens confront the dangerous sexism entrenched in their elite, formerly all-male boarding school. After Jules Devereaux is sexually assaulted by her influential ex-boyfriend, new (platonic) friend James Baxter, a hockey player, resolves to stand up for her. Together, they hatch a daring plot to make a public statement. Alternating chapters from these equally compelling narrators detail two distinct paths toward activism. Copyright 2018 Horn Book Guide Reviews.

In this dark and timely novel, two teens confront the dangerous sexism entrenched in their elite, formerly all-male New England boarding school. James Baxter joins Fullbrook Academy as a hockey player on an athletic scholarship. A brutal football accident back home in Ohio has left James wary of the chummy violence that team sports breed, but as a scholarship student he feels obligated to assimilate. Jules Devereaux is a legacy student, but her open criticism of Fullbrook's male-?centric social hierarchies isolates her and makes her peers uncomfortable. The two forge an unlikely (platonic) connection, but their bond is tested when Jules is sexually assaulted by her rich, influential ex-boyfriend. In alternating chapters James and Jules are equally compelling narrators whose stories detail two distinct paths toward activism. Jules speaks up about her assault, opening herself up to judgment but empowering others to share similar traumas. James exhibits empathy toward his new friend; he hesitates to provoke his moneyed classmates but is resolute in his decision to stand up for Jules. Together, they hatch a daring plot to make a public statement; although their act of rebellion isn't as destructive as the ominous tension threatens, it serves as a poignant catalyst for change and a bittersweet resolution for Jules and James. This is a bleak depiction of toxic prep-school culture, but one that feels all too real. jessica tackett macdonald Copyright 2018 Horn Book Magazine Reviews.

Kiely's () newest alternates perspectives between jock Jamie "Bax" Baxter, a new student at Fullbrook Academy who is escaping tragedy and determined to start over, and feminist activist Jules, who is fed up with Fullbrook's social politics and its traditions based on hierarchy and privilege. The novel focuses on a nonconsensual encounter between Jules and her ex, Ethan, after both have been drinking at a party. Jules is left wondering whether what happened to her was sexual assault. Kiely explores the reactions to Jules's claim from multiple angles; everyone has a different opinion about what happened. Gillian, who is Ethan's current girlfriend and Jules's ex-best friend, witnessed the incident and believes that Jules lured Ethan into cheating. Other people also blame Jules and label her a slut, seeing Ethan and Gillian as victims, and there are further reprisals after Jules comes forward. In his portrayal of Jamie, Kiely writes against jock stereotypes, presenting him as sensitive, understanding, and courageous—a good guy for all women (and men) to have in their corner. A novel to discuss, this takes up timely issues about privilege, problematic school "traditions," and how institutions can in some cases protect their athletes and discourage women from reporting assault. Ages 14–up. Agency: Rob Weisbach Creative Management. (May)

When the ground is hardNunn, Malla

The body of Christopher CreedPlum-Ucci, Carol, 1957-