Tooth and nail : the making of a female fight doctor / Linda D. Dahl. 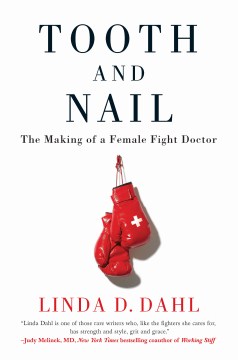 This memoir by a woman who practiced medicine on the Upper East Side and moonlighted as a boxing doctor seems destined to become a TV movie. How does Dahl, whose Syrian parents raised her in the Midwest, end up ringside? Credit her now ex-husband, who watched the sport on television and piqued her interest. Dahl makes funny observations about the macho ringside crowd: "Since I wasn't a girlfriend, official or stripper, no one really knew what to make of me." She shares some basics about boxing and about ear, nose, and throat medicine, her specialty. Fight fans will be intrigued by her encounters with a few legends, including Mike Tyson. (She meets him at a conference, and he invites her to his hotel room, where he reminisces, smokes a joint, and falls asleep.) Dahl reveals that she worked her last match a decade ago, that she runs her own practice, that she rearranged the chronology of some fights, changed many names, and omitted her daughter from the story. Still, though it lacks a knockout punch, this is one fascinating tale. Copyright 2018 Booklist Reviews.

Dahl, an ear, nose, and throat (ENT) physician, recounts her residency in Bronx, NY, as well as her experience as a ringside doctor for the New York State Athletic Commission. The author became intrigued by boxing through her ex-husband, taking a chance on the opportunity to work as a female fight doctor. After completing her residency, she worked in private practice as an ENT by day and ringside by night. It was her responsibility to make sure the fighters were lucid enough to continue. Assessing the risks for major concussions, spikes in blood pressure, and sinus collapse, she could step in and cancel a fight if she felt a life was at risk. Throughout, Dahl notes her struggles with physical insecurity and a general lack of confidence, being a woman of Middle Eastern descent from North Dakota in the cutthroat world of New York medicine. This self-deprecation is overplayed and becomes tedious, hindering the narrative. Eventually, the author channels the self-possession of a patient who is a professional dominatrix, creating a new persona. A solid choice for enthusiasts of boxing or medicine; especially illuminating are the unfortunate reflections on sexual harassment inherent in both fields are.

In this entertaining memoir, Dahl details her road to becoming one of the only female fight doctors. Raised in the Midwest by Syrian immigrant parents, Dahl was a surgical resident living in the Bronx when she became enthralled with boxing while watching a fight between Shane Mosley and Oscar de la Hoya in 2000. She eventually landed an uninspiring job as a hospital ear, nose, throat physician; but her boxing passion led her to work secretly as a fight doctor at professional fights. She recounts one of her first fights, when she realized after the first round that the Venezuelan fighter had been hit below the belt, "his traumatic hernia blossoming," but he refused to have her check him in public. While she earned the trust of fighters, men throughout the boxing world continued to fawn over her good looks ("deflecting attention became a bigger job than working the fights"). It wasn't until she was working a fight between Miguel Cotto and Paulie Malignaggi that her professional life took a turn. The fight had been aired on television, and her secret became known at the hospital. Head physicians congratulated her on her selfless work, and her newfound confidence gave her courage to start her own practice. Dahl offers a unique look at the world of boxing in this uplifting story about realizing one's destiny.