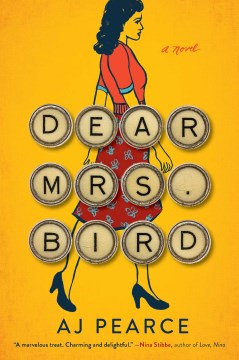 When Pearce happened upon a 1939 British women's magazine, the idea for her first novel was born. Pearce glimpsed a time when "women faced unimaginably difficult situations" and often had nowhere to turn besides writing a letter to the "Problems Page." From those voices of the past arose heroine Emmeline Lake, a plucky young woman trying to do her part for the war effort. When Emmy hastily takes a job at Woman's Friend, a magazine on its last legs, her journalistic dreams seem dashed. Instead of gathering stories from the front line, she's under the thumb of conservative Mrs. Bird, who refuses to answer letters with any "Unpleasantness." Deciding to take matters into her own hands, Emmy secretly replies to readers looking for guidance. But when her life changes forever after a German air raid, Emmy must end the ruse and face reality. Set against a backdrop of war-torn London, this is a charming and heartfelt novel. Pearce brings to life a tale of true friendship, and how love will outlast even the most challenging times. Copyright 2018 Booklist Reviews.

In 1940s London, 22-year-old Emmy applies for a job at what she assumes will be the , which would fulfill her lifelong dream to be a journalist. With her fiancé Edmund away at war, Emmy does her part at home, volunteering evenings at the firehouse call center during air raids. To her initial dismay, her position is a junior typist at magazine, with her primary role being to compose responses for Mrs. Bird's Problem Page, much like a modern-day Dear Abby. Overbearing and rude, Mrs. Bird refuses letters deemed unpleasant, allowing Emmy to answer only the most mundane queries with unhelpful replies. After an upsetting telegram from Edmund, Emmy boldly begins answering the poor women whose real problems Mrs. Bird would ignore, keeping it secret from even her best friend Bunty. Emmy bravely keeps a positive outlook, but when tragedy strikes too close to home, she is filled with guilt and loss. Fans of Jojo Moyes will enjoy Pearce's debut, with its plucky female characters and fresh portrait of women's lives in wartime Britain.

Pearce's clever debut follows a plucky Londoner during the Blitz who dreams about becoming a war correspondent. When 22-year-old Emmeline Lake sees an ad for a "Junior" from the's publisher in 1940, she believes this will be the start of her journalism career. Alas, the job entails assisting Henrietta Bird, the advice columnist in , a magazine dying off from fustiness. Henrietta is a literary Violet Crawley who won't answer letters involving any unpleasantness, which eliminates most everything pertinent. Emmy, however, fails to destroy unsuitable letters as instructed, instead answering them privately under Mrs. Bird's forged signature. Meanwhile, she and her best friend, Bunty, demonstrate resolve as bombs rain down night after night and Emmy's fiancé informs her, via overseas telegram, that he is leaving her for a nurse. The novel has a wonderfully droll tone, a reminder of the exuberance of youth even under dire circumstances. Headlined by its winning lead character, who always keeps carrying on, Pearce's novel is a delight.

The matchmaker of PerigordStuart, Julia

The right sort of manMontclair, Allison

Everyone brave is forgivenCleave, Chris