In dust and ashes / Anne Holt ; translated from the Norwegian by Anne Bruce. 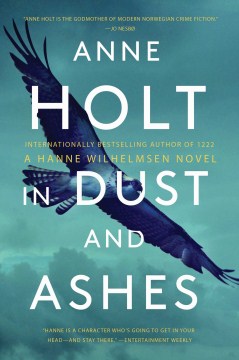 One case bedevils Oslo Police Superintendent Kjell Bonsaksen at the end of his career: the conviction of Jonas Abrahamsen for the murder of Jonas' wife, Anna, in 2004, two years after the tragic accidental death of their three-year-old daughter. So Bonsaksen takes the file of what he considers a case of miscarried justice to Detective Henrik Holme, protégé of legendary detective Hanne Wilhelmsen, now a special adviser on cold cases. While Holme, a celebrity after his work on terrorist bombings in 2014, sees indications of Abrahamsen's innocence, Wilhelmsen is keen to look instead into the recent suicide of deplored right-winger Iselin Havørn, which she believes was more likely a murder despite evidence to the contrary. As the two detectives pursue their respective assignments, the cases link in a surprising fashion. In this tenth and final book in the Hanne Wilhelmsen series, Wilhelmsen is as intuitive, and prickly, as ever, as Holt explores further the relationship between Wilhelmsen and Holme. For fans of Jo Nesbø, who has noted Holt's primacy in Norwegian crime fiction, and of the genre in general. Copyright 2018 Booklist Reviews.

At the start of Holt's elegiac 10th and final novel featuring Oslo chief inspector Hanne Wilhelmsen (after 2017's ), veteran police detective Kjell Bonsaksen, who's about to retire, brings a possible miscarriage of justice to the attention of Hanne's eccentric disciple, Henrik Holme. In 2004, Jonas Abrahamsen, whose marriage fell apart after the death of his three-year-old daughter in a car accident in 2001, was convicted of his ex-wife's murder. Kjell believes that Jonas, who has served 12 years in prison, is innocent. Meanwhile, Hanne, a gifted and unorthodox investigator, suspects that the death of far-right activist Iselin Havørn is not the suicide it appears. Under Hanne's guidance, Henrik gradually grows into maturity as a genuine humanitarian, while Hanne, despite her physical limitations due to a serious line-of-duty injury, digs into Havørn's background, shedding light on right-wing European movements with their anti-Muslim "criminal, capitalist conspiracy" theories. For Hanne and Henrik, both convincing complex characters, all suffering comes down to the "good old sins": money, sex, and revenge. Readers will be sorry to see the last of them.

The princess of BurundiEriksson, Kjell, 1953-