Through Yup'ik eyes : an adopted son explores the landscape of family / Colin Chisholm. 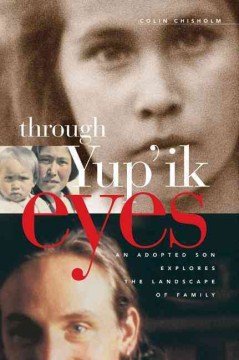 Gr. 6-12. This canine collective biography highlights the accomplishments of nine dogs from the Yukon that worked as "packhorse, transit system, security guard, and pal rolled into one." Several have legendary reputations: John Muir's Stickeen explored glaciers with his master; Balto achieved motion picture fame; and Nero and Julian were said to be the inspiration for Buck in Jack London's Call of the Wild. Accompanying the main text are numerous sidebars on related topics, ranging from information on the Great Serum Run that took place in 1925 and the Canadian Mounties to background on dog breeds and the Iditarod. In fact, the sidebars sometimes threaten to overwhelm the primary accounts of canine loyalty and heroism. Still, there's a wealth of information here, along with some great black-and-white historical photos, if readers' eyes don't glaze over as they try to take it all in. Source notes, a bibliography, and an excellent index are appended. ((Reviewed September 1, 2001))Copyright 2001 Booklist Reviews

Homesteading and settling the frontierMorretta, Alison

Lewis and Clark's journey of discovery in American historyEdwards, Judith, 1940-