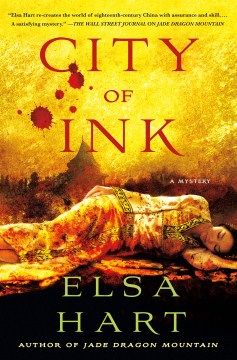 *Starred Review* After six years of exile, Li Du (The White Mirror, 2016) has returned to a much different Beijing than the one he left in 1705: the Qing emperor has tightened security by expelling Ming aristocrats from the inner city and closing the imperial library where Li Du once worked. Now, as assistant to the North Borough's Chief Inspector Sun, Li Du finds his responsibilities leaning toward paper shuffling. But when Pan, a powerful Minister of Rites official, and Madame Hong, wife of the Black Tile Factory's owner, are murdered in the factory's office, Li Du is tasked with investigating. Li Du's superiors decree that Madame Hong's husband committed the murders in a jealous rage, taking his apparent prison suicide as a confession. Unconvinced, Li Du unravels a web of corruption, revealing motives among Beijing's most respected ministers, Jesuit priests, and the flood of hopeful students in Beijing for civil-service exams. At the same time, Li Du recruits help from his adventuring storyteller friend, Hamza, to finally exonerate his mentor, Shu, of guilt in the assassination plot that resulted in his execution and Li Du's exile. Rich in period detail, a sharply rendered exotic setting, and a web of well-crafted plots, Li Du's third novel will appeal to fans of historical mysteries by Lisa See, Laura Joh Rowland, and Abir Mukherjee. Copyright 2018 Booklist Reviews.

Cast out to China's far borders, former imperial librarian Li Du finds himself back in Beijing, facing painful memories at every corner as he investigates his mentor's execution. Then he gets distracted by the murder of a factory owner's wife, caught with her putative lover—an explanation Li Du rejects instantly. Next in the 18th century-set series, following the well-received and .

Hart's superb third novel set in 18th-century China (after 2016's ) finds librarian Li Du back in Beijing after a period of exile. As the secretary to Chief Inspector Sun, he transcribes witness statements and performs other clerical duties. When two bodies are found in a tile factory office with their throats slit, Li Du accompanies his boss to the scene. The victims are Madam Hong, whose husband, Hong, owns the factory, and Pan Yongfa, an employee of the Ministry of Rites, responsible for negotiating contracts with Hong and inspecting the quality of the work being done. The proximity of the corpses to each other leads Sun to suspect that they were discovered in flagrante delicto by Hong, who murdered them in a jealous rage—a motive that under Chinese law serves as an absolute defense. Hong refuses to confess, however, and Li Du, who suspects that the case is much less straightforward than it appears, investigates on his own. As always, Hart excels at making even walk-on characters fully realized and at combining a gripping whodunit plot with a vivid evocation of the period. This entry solidifies her status as a top-notch historical mystery author.

Death of a blue lanternWest, Christopher, 1954-

Claws of the cat: a Shinobi mysterySpann, Susan