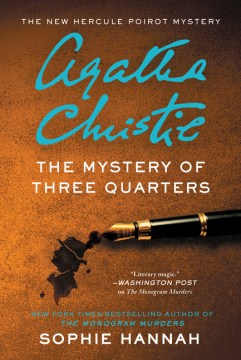 *Starred Review* It's a puzzle worthy of the skills of legendary detective Hercule Poirot: four persons receive letters accusing them of the murder of one Barnabas Pandy, letters ostensibly sent by Poirot himself. Two of the recipients, who have never heard of Pandy, are furious: Sylvia Rule believes her daughter's fiancé, a man she hates, to be behind this scheme, while John McCrodden suspects his disapproving solicitor father. The other two—Annabel Treadway, Pandy's granddaughter, who lives in his house, and Hugh Dockerill, housemaster at Pandy's great-grandson's school—regret what they know to be an error, for the 94-year-old Pandy accidentally drowned in his bath three months earlier. Recruiting Scotland Yard detective Edward Catchpool for assistance, Poirot starts with just one clue, a flaw in the letter e on the typewriter used by the accuser. Then the intuitive sleuthing begins, as Poirot looks for connections between Pandy and the four recipients, and among the recipients themselves, scheduling his customary reveal with all parties present before he cracks the case, to put pressure on himself, with a slice of an ingeniously constructed cake at the center. In her third Poirot mystery, Hannah, authorized to continue the series by Agatha Christie's estate, once again nails the style and substance of her beloved predecessor, producing another treat for Christie fans. Copyright 2018 Booklist Reviews.

On his third outing with top mystery writer Hannah, Hercule Poirot is accused of writing letters blaming the recipients for murdering elderly Barnabas Pandy. With a 100,000-copy first printing.

Hercule Poirot isn't surprised when he's recognized on the street in front of Whitehaven Mansions, but he is taken aback by the venom and anger directed at him by a woman named Sylvia Rule. She has a letter written by Poirot saying she murdered Barnabus Pandy, someone she has not even met, and she demands that he recuse this slander. Then three more people accuse him of the same thing. Poirot asks his friend Inspector Catchpool to determine the forger, why these four strangers are accused of the same murder, and whether Pandy's death was murder or tragic accident. Resurrecting a character as famous and beloved as Poirot is not for the faint-of-heart writer, and Hannah's third installment in her reboot (after and ) is her best yet. It rings true to Agatha Christie's original writing, capturing the character of Poirot. Enthusiastically recommended for fans of Hannah's other Poirot novels and detective fiction and Christie's original works. [See Prepub Alert, 2/19/18.]

Bestseller Hannah's third Hercule Poirot pastiche (after 2016's ) offers Agatha Christie fans another ingeniously deceptive puzzle. The premise is especially clever—someone, posing as Poirot, has sent letters to four people accusing each of them of having murdered Barnabas Pandy. Pandy, a 94-year-old, was found drowned in his bathtub in Combingham Hall three months earlier—a death that was universally accepted as a tragic accident. Two of the recipients of the letters confront Poirot angrily, professing to have no idea who Pandy was, but the third, Annabel Treadway, distraught at the accusation, discloses that Pandy was her grandfather and insists that no one in the household could possibly have killed him. Aided again by Insp. Edward Catchpool, an enigmatic Scotland Yarder, Poirot uses his "little gray cells" to ascertain who has been impersonating him, whether Pandy was in fact the victim of foul play, and if so, whodunit. The gratifying reveal is a neat variation on one of Christie's own solutions and demonstrates Hannah's facility at combining her own plotting gifts with another author's creation.

The light in the ruinsBohjalian, Chris, 1960-