An act of villainy / Ashley Weaver. 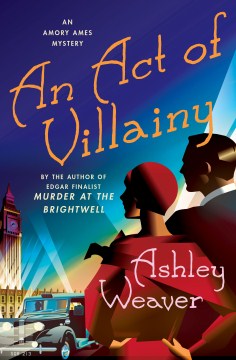 The fifth in Weaver's Amory Ames series starring a well-off British couple who dabble in crime-solving in the 1930s, has a West End theater as its primary setting. Gerard Holloway, an old married friend of Amory and Milo's, spreads his money and talents around thick. Holloway is producing a play he's written. And he's cast his mistress in the starring role. The playwright invites Amory and Milo to rehearsal and to opening night, hoping they can shed some light on the threatening letters that have been shoved under the mistress' dressing-room door. Amory later discovers the blonde-bombshell star strangled with a gold curtain cord in the same dressing room. Weaver brings in a Nick-and-Nora dynamic with her high-living, slightly flawed detective couple. The combination West End backstage and upper-class drawing room proves equally winning. The first in this series, Murder at the Brightwell? (2014), was nominated for an Edgar Award for best first novel by an American author. Copyright 2018 Booklist Reviews.

With husband Milo, Amory Ames glides through 1930s London to the dress rehearsal of a new play directed by friend Gerard Holloway. Unfortunately, Gerard has cast his mistress, Flora Bell, in the lead (Amory is friends with his wife), and he wants her to figure out who's sending threatening letters to Flora. Curtains up for another charmer from Louisiana librarian Weaver.

The fifth entry in the "Amory Ames" historical series (after ) carries the same charming tone of the first book. Amory and her husband, Milo, are on much better terms than when we originally met them, enjoying the fashionable life in 1930s London. One evening, they run into an old friend of Milo's, wealthy investor and former actor Gerard Holloway, who is producing a play; he invites them to a dress rehearsal. It turns out that the lead actress, Gerard's mistress, is receiving threatening letters. As she has several times in the past, Amory soon stumbles upon a murder. This time the path to finding the killer is particularly circuitous and nearly fatal for the intrepid Amory. An excellent addition to the series, this could also be read independently. The period setting is as always meticulous and the main characters riveting. Fans of Carola Dunn's "Daisy Dalrymple" books might appreciate this series, despite the differences in tone and character. Fans of light period mysteries with fashion and flair will be caught up in Amory's latest adventure. [See Prepub Alert, 3/12/18.]

At the start of Weaver's elegant fifth mystery set in 1930s England (after 2017's ), London socialite Amory Ames and her husband, Milo, run into their friend Gerard Holloway, who invites them to attend the dress rehearsal of a new play he's producing. Amory admires Gerald and his wife's successful marriage, since she and charming, cavalier Milo have had difficulties in the past. So Amory is shocked to hear that Gerard is having an affair with his beautiful leading lady, Flora Bell. Someone has been leaving threatening letters in Flora's dressing room, though Milo thinks the threats are inconsequential—until Amory finds Flora's body hanging from a curtain rope. Suspects include Flora's dissolute brother, her ex-lover costar, and her jealous understudy. When it comes to theater folk, the best way to uncover a killer is to put on a show, and with the collaboration of Milo and canny Detective Inspector Jones, clever Amory devises a drama to force a confession. Lovers of classic, twisty British mysteries will have jolly good fun.