Give me your hand / Megan Abbott. 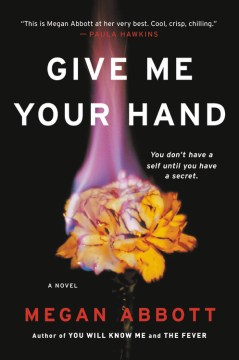 *Starred Review* Kit Owens has a secret—actually, it's Diane Fleming's secret, shared when the two of them were teens, but the shocking revelation creates a burden and a twisted bond Kit wishes they didn't have. The adult Kit is a postdoc lab worker fighting for a spot on the research team of the spiky, darkly glamorous Dr. Severin, who's just won an NIH research grant to study premenstrual dysphoric disorder (PMDD). "Like PMS only much, much worse," according to Kit, PMDD, in its worst extremes, drives women to violent and destructive acts. When Diane makes an unexpected reappearance in Kit's life, in her lab, there are fatal consequences, and Kit finds that the cord connecting her to Diane may strangle them both. Once again, Abbott (You Will Know Me, 2016) plunges us deep into a vividly realized world of intense competition and creates life-or-death stakes where we wouldn't have known to look for them. There's claustrophobic tension between scrappy, striving Kit and Diane, the golden girl who always seemed a little bit off; even better is the nested power struggle between the three female characters, studying a misunderstood women's health issue in the mostly male milieu of research science. Procedural fans may have a few nitpicks, but this is a brilliant riff on hard science, human nature, and the ultimate unknowability of the human brain. Copyright 2018 Booklist Reviews.

Kit Owens gets both a new friend and an academic jolt when she meets charismatic Diane Fleming in her high school chemistry class. Then Diane shares a secret that blows them apart, and years later Kit finds herself in dangerous competition with her former friend for her dream job. Buzzing already; with a 50,000-copy first printing.

Kit Owens and Diane Fleming, the protagonists of this nuanced tale of soured friendships, blood-soaked ambition, and desperate murder from Thriller Award–winner Abbott (), were once fast friends—until Diane tells Kit a secret so dark that it shatters their friendship, sending Kit into a minor tailspin. But high school is drawing to a close, and Kit hopes she'll never see Diane again. Fast-forward more than a decade, and Kit is working in a lab under the impressive Dr. Lena Severin. When a new grant is announced to study premenstrual dysphoric disorder, Kit can hardly contain her shock as Diane reappears as a newly poached superstar from a competing lab. Kit and Diane each want coveted spots on Dr. Severin's PMDD research team, and as the only women in the male-dominated lab, they must deal with their colleagues' thinly veiled misogyny. When Diane's secret pulses to the surface, lives are lost and futures are put in doubt in a mad rush to keep the past in its place. No writer can touch Abbott in the realm of twisted desire and relationships between women, both intimate and feral.

The woman in the windowFinn, A. J.