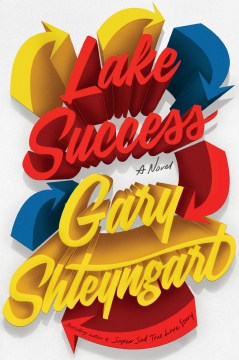 *Starred Review* Shteyngart's acidly prescient novel Super Sad True Love Story (2010) looked to the near-future. This rambunctious tale of a morally challenged, on-the-run New York hedge-fund manager takes place during the incendiary 2016 presidential campaign. A deft satirist, Shteyngart revels in describing Barry Cohen's ludicrously elite environs and calculated strategies based on his belief that a hedge-fund manager must "be a storyteller first and last." Barry's anxious striving stems from his unhappy adolescence in Queens, while a vestige of his abandoned literary dreams is found in the name of his fund, This Side of Capital, a cockeyed tribute to F. Scott Fitzgerald. Barry is proud of his gorgeous, smart, younger wife, Seema, a former lawyer and the daughter of Tamil immigrants from India, as though she was a rare, priceless work of art, and he had hoped to multiply his investment with children. After IVF procedures, their son, Shiva, was born; now three, he has severe autism. Barry worships perfection; his one true passion is collecting vintage luxury watches, taking comfort in their elegance, heft, and orderliness. He cannot cope with Shiva's extreme sensitivity, and, after a terrible commotion, he flees with a suitcase full of absurdly expensive timepieces and a hazy idea about finding his college girlfriend. Abandoning his bubble of privilege and tossing out his cellphone and credit cards, he travels the country on Greyhound buses. Barry is absurdly impractical, deeply deluded, and epically selfish, but he is also omnivorously observant, gutsy, and very funny. His grimy, picaresque journey, presented with a warmhearted drollery reminiscent of that of Stanley Elkin, takes him through the South, across the Texas borderland, and on to California. Barry finds himself in intimate contact with a diverse array of characters, from the down-and-out to the stubbornly hopeful—cash-poor travelers who inspire fear, lust, humility, and a desire to do good. Which is ironic, given the slowly revealed and dismaying financial and legal trouble our hero is in. Meanwhile, Seema, who unlike her volatile, rudderless husband, is in ferocious control of herself, diligently oversees her son's team of caregivers, and conducts a desultory affair with the novel's least convincing character, a writer who serves primarily as a vehicle for Shteyngart's anemic mockery of literary and academic pandering. Shteyngart's storytelling is otherwise electric in its suspense and mordant hilarity; his characters are intriguingly and affectingly complex, and, while the action never stops, he still digs deeply into our perceptions of self and family, lies and truth, ambition and success, greed and generosity, love and betrayal, and, most touchingly, what we deem normal and how we respond to differences. Lake Success is a big, busy, amusing, needling, and outraging novel, one to revel in and argue with, a nervy and chewy choice for book discussions. And the many loaded topics it boldly addresses connect it to an array of other novels. Tom Wolfe's indelible attack on avarice and posturing, The Bonfire of the Vanities (1987), comes to mind first, poignantly enough in the wake of Wolfe's recent death. Financial analyst and corporate attorney turned novelist Cristina Alger offers a lighter, more contemporary take on Wall Street hubris in Little Darlings (2012) and The Banker's Wife (2018). Barry's escape from New York and subsequent adventures resembles a plotline in Sue Halpern's Summer Hours at the Robbers Library (2018) and key aspects of Anne Tyler's Clock Dance (2018). The raucous political milieu, dubious financial machinations, a family's fate, ties to India, and autism are also elements in Salman Rushdie's much grander saga, The Golden House (2017). Readers taken with Shteyngart's sensitive portrayal of Shiva may also appreciate young characters with autism in Ginny Moon, by Benjamin Ludwig (2017);  Harmony, by Carolyn Parkhurst (2016); and Language Arts, by Stephanie Kallos (2015). Barry "didn't know how to harvest love out of sorrow." Will he learn? Will Seema find love? What will become of Shiva? For all his caustic critique and propulsive plotting, Shteyngart is a writer of empathic imagination, ultimately steering this bristling, provocative, sharply comedic, yet richly compassionate novel toward enlightenment and redemption. Copyright 2018 Booklist Reviews.

In his first novel in seven years, relentlessly best-booked Shteyngart (e.g., ) introduces us to ultrarich but clueless and self-absorbed hedge fund manager Barry Cohen, upset by an SEC investigation and his son's diagnosis of autism, who runs cross-country on a Greyhound bus as visions of uncomplicated romance with his high school sweetheart dance in his head. His ambitious, luxury-loving wife, a first-generation American, has her own problems.

Set before the 2016 election, this is the story of a midlife crisis of an individual—and perhaps of the nation. Barry Cohen is a New York hedge fund manager, a member of the .01 percent, married to a beautiful younger Indian American woman and scoring the game of life by people's incomes. Yet he has another side, the memories of a pool cleaner's son who dreamed of becoming a novelist (his hedge fund is called This Side of Capital) and Layla, the lost love he hasn't seen since college. When the SEC begins investigating, his marriage falters, and the challenges of raising an autistic son become overwhelming, Barry takes off, getting on a Greyhound for a trip to El Paso to find his Layla. Throwing his credit cards away, the wealthy Barry finds himself near penniless, rubbing shoulders with the 99 percent and learning something about himself along the way. This is a road trip through a heartland both national and personal with one man's dysfunction echoing his country's as Barry attempts to escape the present only to have the present confront him in the end. Shteyngart's latest (after ) is a hilarious, melancholic, and rapier-sharp tale for our times. [See Prepub Alert, 3/12/18.]

The financial lives of the poetsWalter, Jess, 1965-

My year of rest and relaxationMoshfegh, Ottessa