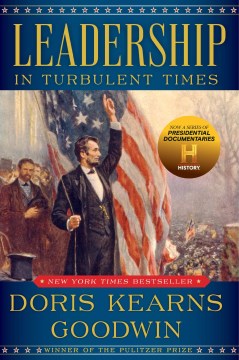 In our own turbulent times, presidential leadership—its qualities, requirements, and outcomes—has become an important concern.  While presidential historian Goodwin (The Bully Pulpit, 2013) does not address the present situation in this beautifully written meditation on the topic, her assessment of four respected presidents' abilities as leaders cannot help but contribute to current debates.  Goodwin considers Lincoln, both Roosevelts, and Lyndon Johnson, all subjects of her previous work, in a three-part inquiry that begins with discussion of each president's formative experiences and early public life, moves to a life-altering crisis for each man and its impact on his trajectory, and, finally, focuses on an episode during that man's time in office that illustrates his particular approach to leadership under difficult conditions.  Goodwin offers no single template for presidential leadership, concluding that the successes of these men reflected unique convergences of the individual, his context, and the crisis at hand. She does, however, identify common and essential characteristics among her legendary subjects: responsiveness to human needs, willingness to evolve, and a wish to be remembered for their achievements. Pulitzer- and Carnegie Medal–winning historian Goodwin draws on 50 years of scholarship in this strong and resonant addition to the literature of the presidency. HIGH-DEMAND BACKSTORY: Best-selling Goodwin's numerous in-person and media appearances will fuel steady interest in this expert, extremely relevant study. Copyright 2018 Booklist Reviews.

The Pulitzer Prize-winning Goodwin has spent five decades studying presidential history, so you can bet she can offer insight into what makes a good leader, especially in the worst of times. Studying Abraham Lincoln, Theodore Roosevelt, Franklin D. Roosevelt, and Lyndon B. Johnson (in the area of civil rights), she finds no common paths but common traits: ambition, resilience, and moral purpose.

Are great leaders born or made? What qualities make a great leader? Pulitzer Prize-winning historian Goodwin () sets out to answer these questions by examining the lives of the four presidents she has studied most thoroughly: Abraham Lincoln, Theodore Roosevelt, Franklin D. Roosevelt, and Lyndon B. Johnson. This book is divided into three sections: "Ambition and the Recognition of Leadership," "Adversity and Growth," and "The Leader and the Times: How They Led." In each, biographical chapters detail a time when each man's leadership skills and abilities were formed, tested, and at their peak. In the final chapter, Goodwin lists the various traits each president displayed and analyzes these through a case study. Although none of these men displayed the exact same qualities to the same degree, their leadership styles fit the needs of the nation at that particular moment. The author concludes that learned leadership skills in conjunction with the right timing in history led these men to success. Goodwin distills years of scholarship into an easily accessible study of leadership qualities that will appeal to anybody interested in American history, U.S. presidents, and leadership studies. [See Prepub Alert, 3/26/18.]

Goodwin () further burnishes her credentials as a popular historian with this thoughtful revisiting of the lives of four presidents to whom she has previously dedicated individual books—Abraham Lincoln, Theodore Roosevelt, Franklin D. Roosevelt, and Lyndon Johnson—with the aim of obtaining answers to eternal questions about leadership, including what life experiences contribute to it and whether "the times make the leader" or vice versa. She toggles back and forth between her subjects in sections that trace their upbringings and ambitions, the adversities that tested them (such as personal tragedies and crippling illness), and their approach to the major challenges that confronted them as presidents. She notes commonalities—each of the four was determined to outwork political opponents—as well as differences, for example contrasting Lincoln's impoverished childhood with the privileged upbringing both Roosevelts had. The meat of the book is four chapters, one for each subject, about important episodes in their presidencies, with headings naming elements of their leadership styles ("Acknowledge when failed policies demand a change in direction"; "Don't hit unless you have to, but when you hit, hit hard"). Goodwin does not shy from criticism, especially of Johnson, whom she worked for in the White House and helped with his memoirs; she writes that he stumbled badly on Vietnam. But overall the tone is inspirational, setting forth examples of how to do leadership right.

Leadership in war: essential lessons from those who made historyRoberts, Andrew, 1963-

Presidents in crisis: tough decisions inside the White House from Truman to ObamaBohn, Michael K.

The presidents club: inside the world's most exclusive fraternityGibbs, Nancy, 1960-

The gatekeepers: how the White House Chiefs of Staff define every presidencyWhipple, Chris (Christopher C.)