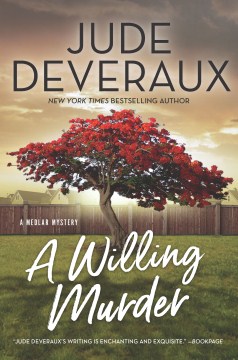 Upon learning she has an aunt—famous, reclusive romance writer Sara Medlar—Kate Medlar becomes a real-estate agent in insular Lachlan, Florida, so she can learn more about her father, who died when she was a child. Sara enthusiastically welcomes her, inviting Kate to stay in her large home along with construction-company owner Jack Wyatt, on crutches recovering from a car accident that killed his half-brother. At one of Jack's sites, the three accidentally uncover the skeletons of Cheryl Morris and her mother, who supposedly left town 20 years before. Sara, Kate, and Jack, who at 11 worshipped the then-teenage Cheryl, investigate, determined to find justice for the two, uncovering decades-old secrets and stirring up a killer determined to protect those secrets. Complicating matters, the suave Alastair Stewart is romantically interested in Kate, annoying Jack. The three well-drawn main characters, plot twists, verbal sparring, and the romance elements distinguish this gentle suspense novel, the first venture into crime fiction by romance-megastar Deveraux. There's enough romance here, though, to interest those who enjoy reading Phyllis Whitney and Barbara Michaels. Copyright 2018 Booklist Reviews.

Surprised that the author is Deveraux, mega-best-selling author of romance and women's fiction? Here she switches gears to write a mystery that opens with two corpses found in small-town Lachlan, FL. Everyone wants them buried figuratively as well as literally, and it takes a trio of risk-taking protagonists to uncover the truth. With a 150,000-copy first printing.

When best-selling romance author Sara Medlar retires to her hometown of Lachlan, FL, and buys the mansion she'd admired as a child, she hires Jack Wyatt, grandson of her childhood boyfriend, to remodel it. She also offers her niece a place to stay when Kate accepts a job as a real estate agent in Lachlan. But Kate and Jack, who is also a house guest, are like oil and water, each irritating the other. When a storm knocks down a tree and uncovers human remains, the trio discover they do have something in common: the need to seek justice for the two women who disappeared 20 years earlier. It's not easy to uncover secrets in a small community. However, Sara, Kate, and Jack are pushy enough to ignore warnings and additional murders, even as they bicker with one another. Acclaimed romance author Deveraux () makes her mystery debut with this delightful small-town tale headed by three engaging leads, whose banter is amusing. At the same time, readers will sympathize with the victims. Suggest for readers who enjoy witty mysteries, such as those by Deborah Coonts, as well as Deveraux's many fans. [See Prepub Alert, 3/12/18.]

Bestselling romance author Deveraux () sets her overwrought debut mystery, an apparent series launch, in familiar territory. Successful romance writer Sara Medlar has returned in style to the Florida equivalent of Peyton Place, her hometown of Lachlan, which teems with rivalries, jealousies, and long-held grudges. Finding retirement dull, Sara welcomes her long-estranged niece, Kate Medlar, to live with her in her newly renovated mansion. Sara and Kate, along with local contractor Jack Wyatt, the self-made grandson of Sara's first love, soon get caught up in a murder investigation when two skeletons are discovered on land Jack purchased to develop. One of the murder victims is long-missing Cheryl Morris, a beautiful girl from the wrong side of the tracks. The necklace Jack gave her years before not only identifies her body but stirs up ugly rumors from the past. Kate, Sara, and Jack's attempt to solve the murders reveals Lachlan's dark underbelly. Mary Higgins Clark fans will best appreciate this one.

Murder at the mansion: a Victorian village mysteryConnolly, Sheila