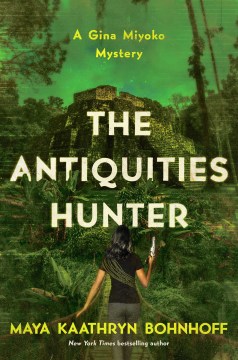 An entertaining debut introducing PI Gina "Tinkerbell" Miyoko. At five foot nine and 94 pounds, she is a Harley-riding, San Francisco Bay houseboat–dwelling powerhouse who is met with frank amazement by most people. When her best friend, Rose, an undercover Park Service agent, is gravely injured, Gina takes her place, going undercover in Mexico in the company of archaeologist Cruz Veras, a Mexican Indiana Jones, to ferret out who is trafficking in looted artifacts. The gamin-like Gina adopts a teasingly glamorous persona looking to spend, spend, spend, and attracts a mysterious antiquities dealer in Cancun. She ultimately ends up, after an unexpected betrayal, trapped in the pitch-black guts of a Mayan temple where she must fight for her life, armed only with her wits and an odd assortment of lucky charms. Gina is a unique series lead, but she sweeps across the pages like an adrenalin-fueled soul sister of Janet Evanovich's flamboyant characters, presented in an equally biting and outrageous narrative that turns on a dime. A promising start to an exciting new series with plenty of crossover YA appeal. Copyright 2018 Booklist Reviews.

Gina Miyoko was a police officer for three years before she became a private investigator. She's sure she can find the man stalking her best friend, Rose Delgado. She does, but Cruz Veras is more than a journalist trying to write a story about Rose. He's also an archaeologist in Mexico who knows that Rose, who works for the National Park Service, is scheduled to testify in a case involving stolen antiquities. When Rose is put out of commission, despite Gina's best efforts, Gina goes undercover in place of her friend. With the blessing of Rose's boss, Gina and Cruz head to Mexico, where she will pose as the wealthy girlfriend of a collector and he will act as her bodyguard. Gina counts on the lucky pieces from her Japanese father and Russian mother, but whom can she trust on an expedition into the jungles in search of stolen artifacts? novel coauthor Bohnhoff () pens an action-packed debut mystery straight out of or an Indiana Jones adventure. The sexual tension sparks between Gina and Cruz, two well-developed, intriguing characters. Readers of Gigi Pandian's "Jaya Jones" mysteries, or, the gold standard, Elizabeth Peters's mysteries, will relish this fast-paced book.

This energetic series launch from bestseller Bohnhoff ( with Michael Reaves) introduces San Francisco PI Gina Miyoko. When Gina's best friend, National Parks Service operative Rose Delgado, is shot and wounded in the line of duty, she teams with archeologist Cruz Veras to investigate. Their search for answers takes them to Cancún, Mexico, where Gina infiltrates the world of powerful antiquities traffickers and learns of newly discovered ancient cities with relics worth millions on the black market. Once Gina and Cruz travel deep into the jungle, Gina has to rely on her own wits as she tries to figure out who's responsible for shooting Rose. A tough, sassy, and relatable investigator, Gina drives a Harley, packs a baby blue Magnum, and is trained in the martial arts. Her rich backstory and family life—her father was a San Francisco cop; her mother, a Russian émigré, plies her with and other good luck charms—adds unusual depth to a fun story. Readers will want to see a lot more of Gina.