A spark of light : a novel / Jodi Picoult. 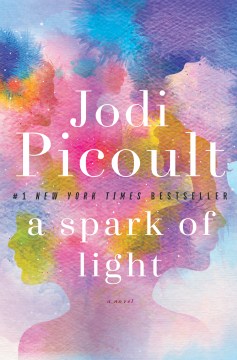 *Starred Review* Following up her hit Small Great Things? (2016), Picoult delivers another riveting yarn about a hot-button issue—this time, it's abortion rights, with a unique narrative format: the story is told backward chronologically over the hours of a tense hostage situation in a women's clinic. When we meet hostage-negotiator Hugh McElroy at the climactic showdown with George Goddard, the father of a teen girl who recently visited the clinic, we know that Hugh's own daughter, 15-year-old Wren, is one of the hostages; Hugh's older sister, Bex, who took Wren to the clinic that morning, has been shot; and that Hugh, like George, is a single father. As the hours tick backward, Picoult reveals what brought each of the characters to the clinic, from a struggling young waitress to an undercover anti-abortion activist to the devoted and devout doctor working at the clinic that day. Even though she's rewinding the story, Picoult manages to keep the tension high as we learn about the characters' personalities and situations. And there's a surprising reveal in the final pages that readers will likely find provocative. Picoult explores both sides of the abortion debate in this carefully crafted, utterly gripping tale, which acknowledges that there are no easy answers. HIGH-DEMAND BACKSTORY: This topical, daringly told, and suspenseful tale is sure to be another Picoult best-seller generating numerous requests.  Copyright 2018 Booklist Reviews.

The author of nine consecutive No. best sellers, Picoult returns with topical fiction involving a gunman taking hostages at a women's reproductive health services clinic. What's especially tough for Hugh McElroy, the police hostage negotiator, is that daughter Wren is inside. With a focus on characters, from the medical staff to the patients to the gunman himself.

Picoult (; ) is known for taking contentious issues and addressing them from a variety of angles while telling compelling, complex stories. Her latest novel hews true to form and centers on the only women's health clinic left in the state of Mississippi to provide abortions after draconian restrictions squeezed others out of existence. After a gunman enters the clinic, shooting at will and taking hostages, police negotiator Hugh McElroy learns that inside are his 15-year-old daughter Wren and sister Bex. The narrative unfolds in an hourly countdown backward, revealing the sequence of events that coalesced in order for each individual to be in this place at this fateful moment. With fully fleshed-out characters and thoroughly realistic storytelling, Picoult pushes readers into the most uncomfortable places, where alternate perspectives are presented without kneejerk reaction and considered without outright rejection. Picoult has achieved what politicians across the spectrum have not been able to: humanized a hot-button issue. Excellent for book clubs, this should also be considered for discussions in critical thinking and political debate. [See Prepub Alert, 4/23/18.]

Drama abounds in Picoult's latest issue-driven novel (following ) in which a hostage crisis in a women's health center/abortion clinic provides a look at a volatile subject. George Goddard, a lone gunman seeking revenge for his daughter's abortion, busts into the clinic in Jackson, Miss., killing and wounding several staff and patients. He holds a handful of them hostage, including Wren and Bex, the 15-year-old daughter and adult sister of Hugh McElroy, the police hostage negotiator assigned to the crisis. Meanwhile, Beth, a teenager in a hospital in Oxford, Miss., whose attempts to have a legal abortion were thwarted, takes medication to abort her 16-week-old fetus and nearly dies from blood loss. She is brought to a hospital and her life is saved, but the state prosecutor's office accuses her of murder upon finding out the reasons for her condition. Picoult's extensive research shines throughout, but the book's reverse chronological structure interferes with the complicated back stories, which include the gunman's reasons for going on a rampage; a doctor's path to performing abortions; why a pro-life believer goes undercover to the clinic to obtain damaging evidence; Beth's thwarted attempts to get a legal abortion; and the relationship between Wren, Bex, and Hugh. Nevertheless, this is a powerful story that brings clarity to the history of abortion and investigates the voices on both sides of the issue.

I let you goMackintosh, Clare

The edge of normalNorton, Carla